Even though it may seem like travellers explored the beautiful city of Sydney all through, it is yet full of secrets.

This majestic Australian hub treasures much more than just beautiful beaches and a dream laidback lifestyle.

The underground of Sydney Harbour is intertwined with a great number of secret tunnels and military mysteries, perfect for adventurers and even divers.

For decades, people of Sydney assumed that they knew most of the hidden tunnels and fortifications under the harbour.

However, there has been another amazing discovery recently. A secret network of tunnels like you have never seen before has been found under the Georgia’s Head Sandstone, only 15 minutes by boat from Mosman.

The original purpose of the network is still unclear, even to experts. 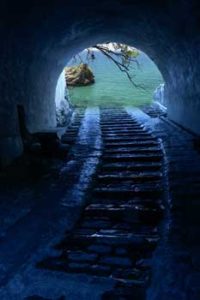 The colonial era represented a lot of danger for the New South Wales capital of Sydney. The government felt the urging need to take certain measures and develop a system guarding the city against an invasion.

The defence network was established as the incredible number of (often secret) tunnels, bunkers and fortifications were built.

Even though most of them were built in a hurry and since the quality was low, the efficiency wasn’t sufficient, people of Sydney believed that the defence system is there to protect them.

Due to the poor design and outdated materials, most of the fortifications had deteriorated over short time.

What’s remaining from the colonial era will probably never serve for its initial purpose of defence at the expense of modern technologies, yet the remnants represent an exciting part of the history and attract tourist from all over the world.

The tunnels were located all around the harbour. There is several bunkers and tunnels under the South Head at Watsons Bay, numerous fortifications nearby the Macquarie Lighthouse in Vaucluse and a fort protecting the Botany Bay entrance on Henry Head.

Long Bay and Boora Point as well as the North Head and Manly are also areas where you can find several forts and other military installations.

The Bradley’s Head and Georges Head and their shores treasure also many preserved fortifications and batteries. 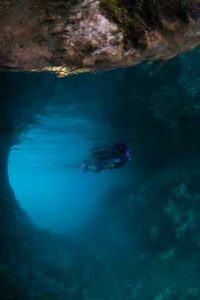 Georges Head is also a place with even more exciting part of the history. The newly discovered part of military protection there does not lie on the top of the cliff, but underwater.

The only way to reach the recently found set of tunnels is by diving and exploring the underwater surrounding around the Georges Head. This opens an amazing opportunity for all lovers of diving.

What could be possibly more exciting than exploring a long time hidden system of tunnels with history dating back to the dates of Sydney being a military frontline?

It sounds appealing, I know. Narrow man-made tunnels lead to caves and further to cliff edges with views over the harbour.

What might have either served as an escape route, or an inventive part of the city protection from possible outer attackers is now a mystery, waiting to be explored by anyone who dares. So, take your diving equipment and let yourself loose around this historical place.

What is now still a mysterious spot could soon become a popular tourist attraction. Places like this are exactly what travellers and adventure seeking people are looking for.

It’s only a matter of time till the Australian Government and the City Council decides to promote them and turn them into a large income generating mechanism.

If white sand beaches, surf-perfect waves and flawless weather full of sunshine wasn’t a big enough invitation for you to visit Sydney, there you have another discreet reason. See you Down Under!

Places to Visit in Singapore