Ayers Rock or Uluru: The most iconic symbol of the whole continent is located right in Australia’s heart.

This massive rock (Ayers Rock)  formation rising out of Australian desert is famous for its endless shades of red sand for offering the ultimate lifetime outback experience which cannot be found anywhere else.

Remote, peaceful and impressive – those all only some of the adjectives which can describe this sacred place.

Though the magical atmosphere of Uluru’s sunsets and sunrises can simply never be described well enough, it has to be experienced.

Uluru, also known as the Ayers Rock, is a monolit dating back to ancient times; while „Uluru“ is the name coming from the Aboriginals, „Ayers Rock“ is the name given by Australian Explorer William Gosse (after the Chief Secretary  of South Australia, Sir Henry Ayers) in 1873 after he first spotted this spectacular natural jewel. Since 2002, the dual name in order “Uluru /Ayers Rock” officially applies.

The impressive landmark was created about 600 million year ago and today,

Uluru is reaching the heigh of 348 meters above the ground, though the major part (estimated about 2.5 km) of it is hidden underground.

The sandstone formation was initially simply a sand.

The whole process of transformation begun when the huge crustal blocks of the Australian continent (Musgrave, Mann and Petermann Ranges) came together, creating pressure and thus shedding the granite.

The limestone together with sand and mud eventually formed Uluru and also the nearby Kata Tjuta, when the sediments turned into rock.

Uluru dominates the landscape of the Red Centre of Australia and is located in the Uluru-Kata Tjuta National Park, around 450

km southwest from Alice Springs (the nearest large city), connecting the outback with the rest of Australia.

Due to the remoteness of the area, a small town Yulara has been established in order to provide some essential services (such as accommodation, restaurant, small airport etc) for visitors.

The national park is officially owned by the Aboriginal people and Uluru is listed in the UNESCO World Heritage Site list.

Uluru is a spiritual and sacred place to Anangu people, the Indigenous people of the area, and has many myths and legends about its origin.

Though the landmark is available for climbing, visitors are discouraged to do so due to the dangerous conditions of the long and steep hike causing number of deaths in the history. Another reason not to climb Uluru is its spiritual significance which shall be respected.

and desert culture. The surrounding area is rich in ancient paintings and rock caves telling the story of the ancestors.

Each side of the Rock brings a different creation story associated with it and an experienced guide is recommended. 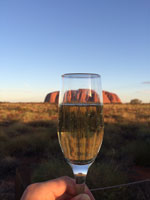 Apart from the base walk, the most impressive experience about Uluru is undoubtedly the sunset and sunrise.

The monolith is famous for its appearance which is „changing colours“ in the dusk and glows red during sunset and dawn.

The Uluru‘s red-orange hue is caused by the surface oxidation of the iron content.

There are special viewing areas for tourists designated to enable easy access to the best views of the formation.

The panorama of the desert and Uluru rising out of the hot, red soil is an unforgettable and unique experience.

END_OF_DOCUMENT_TOKEN_TO_BE_REPLACED 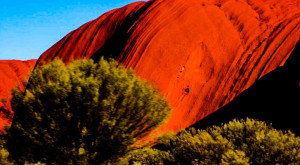 Ayers Rock or Uluru: The most iconic symbol of the whole continent is located right in…