Untouched, pristine and wild. Exploring this undiscovered piece of land is definitely an adventure of a lifetime.

The arctic region is the area surrounding the North Pole, located at the northernmost part of the Earth. It consists mainly of the Arctic Ocean and surrounding land, which includes northern parts of Alaska, Canada, Finland, Iceland, Norway, Russia and Sweden. Depending on the season, the region is mostly covered by a thick layer of ice across the vast expanse of ocean during winter.

Even during summer months, huge pieces of ice and bergs are constantly moving within the area. The ice cover remains permanent in some areas and it is surrounded by permafrost. Depending on the definition, the Arctic region is usually defined by the Arctic Circle as an imaginary boundary line.

The special location and extreme conditions make this region quite a unique place. Thanks to the location on the very north of the planet, the Northern Pole is a place with polar nights during winter when the sun doesn’t show up for six months and midnight sun in summer, on the opposite site, where the sun never goes below the horizon for the same amount of time (summer solstice and winter solstice). Technically, the sun rises and sets only once each year, always for a damn long time.

The arctic is also a place where the breathtaking colour display on the sky called Aurora Borealis or the northern lights often appear.

Cantered around the North Pole, the lights are produced by the solar wind, the solar storm coming from the Sun. Different gases result in different colours of the colour formations.

The North Pole region can be divided into two climate types: the maritime climate occurs near the ocean, while the interior parts are facing more of the continental climate. Inside, there is usually less snow and the weather is actually dryer. The Maritime climate comes with wet winters with huge snow rainfall, resulting in 60-125 cm thick snow cover.

The Arctic region is inhabited by approximately four million people (especially indigenous groups, later arrival and explorers), living in the northern part of Arctic countries. It is a very sparsely populated area and the living conditions are truly challenging.

The Arctic Ocean, although it is the shallowest one on the planet, is a home to a rich marine life. Some of the animals living in the area are for example seals, walrus, whales or belugas. Land animal then include polar bear, snowy owl, Arctic fox or wolf as well as many birds.

The recent changes in global climate including global warming make the Arctic region a vulnerable and endangered place as a result of the sea ice reduction. Therefore, there is many preservation projects and climate models running to help the situation.

END_OF_DOCUMENT_TOKEN_TO_BE_REPLACED

Places to Visit in Arctic 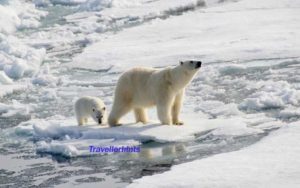 Untouched, pristine and wild. Exploring this undiscovered piece of land is definitely an…