Some of Sydney's best beaches are within a 10 km radius from the city centre.

Sydney is a city offering simply everything. Cultural events, nightlife, welcoming atmosphere.. and most importantly, it is a city with some of the world’s greatest beaches.

Every single one of them is stunning and unique in its own way. If you would like to explore each one of them, you would probably need a year. Here is at least a list of those, you should not miss at any price. 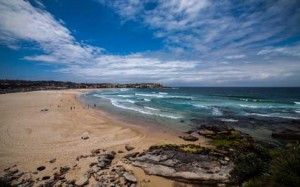 Bondi is indisputably one of Sydney’s signature places. Bondi beaches represent not only the perfect Pacific waves and soft golden sand, but it is also a place of great vibes waiting for visitors every day.

Bondi Beach is one of Australia’s most famous ones and belongs to some of the most visited sites in the country as well.

The picture-perfect one-kilometre stretch of golden sand is located less than 10 km far from the city centre, making it easily reachable for a pleasant gateway by public transport.

Bondi and the surrounding suburb holding the same name is a popular location including Bondi Junction and North Bondi in Eastern Suburbs.

The name of Bondi Beach is an Aboriginal word and means „water breaking over rocks“ which perfectly describes its main feature – perfect waves.

A busy beach is an ideal place for surfers and various sports lovers seeking great jogging trails, walks, skating or an outdoor gym.

Bondi Beach is hosting a number of events all year round. Those include for example City to Surf run, Festival of Winds (kite flying), Bondi Winter Magic Festival including an ice-skating rink or different art shows.

It is also an important point within the six kilometres long Bondi to Coogee Coastal Walk. This scenic walking trail is every year enhanced by the Sculpture by the Sea outdoor exhibition performing artworks from the local artist.

Apart from life-saving, on one end there is also the Bondi Icebergs Swimming Club managing an outdoor saltwater swimming pool called Bondi Baths.

Another great highlight is also the Bondi Skate Park established in 1991.

The adjacent Bondi Pavilion offers changing rooms and lockers and the neighbouring area is full of cafes, restaurants and also several barbecue spots on a grassy area.

Manly Beach is one of Sydney’s premier beaches. Belonging among the Northern Beaches it is located in tydney’s suburb of Manly where the stretch of Northern Beaches actually starts, going all the way up to Palm Beach.

The beach is divided into three sections, which are South Steyne, North Steyne and Queenscliff. One of the Australia’s most famous surfing beaches was named by Captain Arthur Phillip as he was impressed by the behaviour of the Aboriginal population in the area.

The whole area with promenade is packed with cozy cafes and fine restaurants with delicious seafood and also bars and clubs just a short walk from the soft sand.

Manly Beach is easily reachable from the heart of the city by a 30 minutes ferry trip going from the Circular Quay to Manly Wharf.

Manly Beach offers unique laid-back atmosphere within a sea-side hub and serves often as a day trip getaway from the busy city life.

The beach itself is around 1.5 km long stretch of gold sand and tranquil water and has a sheltered ocean pool at one of its ends, like many other beaches in Sydney do.

Manly beach is highly appreciated by surfers – surfing professionals and even beginners thanks to its surfing school.

Manly Beach is also a starting point for a beautiful Manly Scenic Walkway going around the foreshore, offering a number of stunning views and beautiful scenery. Another top attraction within a short walk is the world class aquarium named Oceanworld Manly.

Shelly, or Shelley Beaches, in Sydney’s suburb of Manly, is part of the protected marine reserve Cabbage Tree Bay and it is adjacent to North Head and Fairy Bower.

The beach is popular especially for snorkelers and scuba divers thanks to its perfect depth and tranquil water with perfect visibility and beautiful rich marine life. The maximum depth reaches circa 12 metres, though most areas are rather shallow.

Shelly Beach is relatively small, only about 100 metres long and it is bounded by a reef from one the right hand side.

There are many visitors facilities within the area, including showers, toilets or electric barbecues making Shelly Beach a perfect place for a picnic or a family trip. In a walking distance, there is the number of fine dining restaurants and cafes. 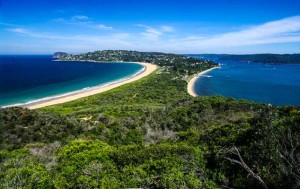 middle of the bay.

Bronte is a relatively small and family oriented beach and it is perfect for various recreational activities. The beach was named after Vice-Admiral Horatio Nelson, Duke of Bronte, who was an important military figure.

Bronte beach is fringed by rocky cliffs from both sides and park area with multiple cafes at its end. The beach’s south end is represented by a 30 m long ocean pool which enjoying high popularity within residents of the whole city.

Some of the facilities include the number of public BBQ places and picnic areas (making the beach popular various family and group gatherings), changing rooms or a kiosk and nearby children’s playground.

The beach is also a home to Surfers Club thanks to its perfect waves for surfing and also plays an important stop along the Bondi – Coogee or Bondi – Bronte walking train along the beautiful Sydney’s coastline.

Freshwater Beach is the first beach in the north of Manly suburb in Sydney. The smaller (around 350 m 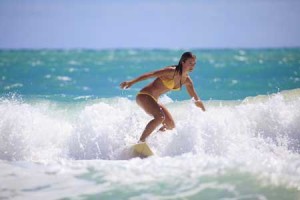 long) beach facing southeast is flanked by two headlands from each side and thanks to its sandbanks, it is an ideal spot for surfers thanks to its consistent waves.

The 50 m saltwater pool at the north end is on the other hand a favourite place for swimmers. Though the beach itself is quite hazardous for swimmers with many rescues each year.

Freshwater Beach is a famous place where surfing in Australia has officially begun when back in 1915 the Hawaiian surfer Duke Kahanamoku carved his surfboard and gave spectators a demonstration of his surfing skills. Thanks to its historical significance, his surfboard is still a proud and maintained item in the surf club.

The 6 km area between Freshwater and Shelly Beach is now part of the Manly – Freshwater World Surfing Reserve.

Just south of Sydney, Cronulla Beach belongs to one of the top surfing ones in the area. Cronulla or sometimes also South Cronulla Beach is about 200 m long and its name comes from the Aboriginal word kurranulla, which means „place of pink shells“.

The beach can be easily reached by train and it is also closeby to the Royal National Park. Apart from surfing, Cronulla Beach is popular to a wide range of other water sports such as kiteboarding, paddleboarding or snorkeling and swimming.

The area around the beach is represented by the park providing resting sport in shade and also a number of restaurants and cafes creating a unique and vibrating atmosphere. 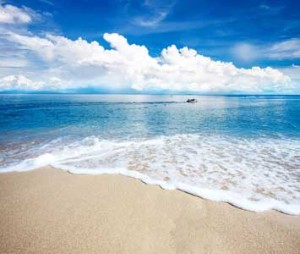 Northern suburb of Sydney, around 41 km far from Sydney’s Central Business District, is the place where the outstanding Palm Beach is located. Part of the Northern Beaches region, Palm Beach is with its iconic lighthouse a famous tourist attraction.

The heritage listed Barrenjoey Lighthouse built in 1881 sits on the top of Barrenjoey Head, Sydney’s most northern point.

The lighthouse is 91 m above the sea level and its surrounding offers a breathtaking view over the whole beach, Broken Bay on the other side or the endless ocean from the opposite side of the Barrenjoey Head. During the season, whales can be also spotted from there. The way up is a a short but steep bushwalk rewarding each visitor with plenty of beautiful landscape views as well.

The beach itself is around 2 km long and it is a great location for a daytrip from the city and has a golf club nearby as well as sailing club and surf school. The place is easily reachable from the city centre (Circular Quay or Central Station) by bus.

Palm Beach is a place where the soap opera Home and Away was filmed and served as fictional Summer Bay town.

Coogee Beach (pronounced as “could-gee”) is a picturesque beach located in the beachside suburb of the same name, situated only 20 minutes far from Sydney’s Business District by public transportation.

The name comes from the Aboriginal word “koojah”, which means “smelly place”, due to the appearance of seaweed within the area and the connected smell during the past. Nowadays, thanks to the Randwick City Council, the beach is being properly cleaned and the perfect 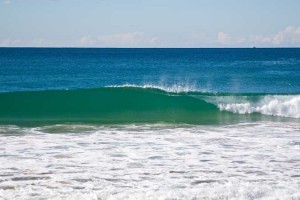 condition is maintained 365 days per year.

Coogee Beach belongs, together with Bondi Beach, to Sydney’s most beautiful ones and serves as a perfect example of a genuine Australian beach lifestyle.

Popular mostly for swimmers and surfers, the beach used to have an amusement pier (Coogee Pleasure Pier in English seaside style) which served as an attraction offering restaurant and a theatre. Due to a strong surf in the area, the pier was later damaged and eventually in 1934 completely demolished.

Coogee is also an ideal place for snorkelling and scuba diving thanks to its protected marine reserve. At the northern end, there are stairs leading to a historical Giles Baths and an open rock pool (Dolphin Point area).

The southern end is a place of the famous and controversial women and children-only ocean pool (McIvers Baths) and Wyllie’s Baths further south. Circa 800 metres offshore there is a small rocky island called Wedding Cake which shelters the beach. 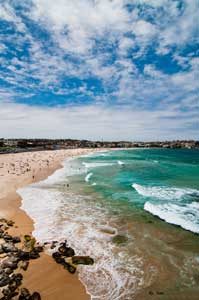 The surrounding is a wonderful combination of historic buildings with plenty of lovely cafes and restaurants and green areas with picnic and barbecue spots, offering a number of spectacular panoramic view over the entire beachside suburb and, indeed, the endless ocean horizon.

Coogee is also a venue for several events during the year including the Coogee Arts Festival, the Annual Coogee Family Fun Day or The Island Challenge which is a popular annual swimming competition involving swim around the Wedding Cake Island.

Don’t miss out Sydney’s Spectacular Beaches on your holiday!