Grampians National Park - Must Visit Destination for All Travellers

The Grampians National Park (also known as Gariwerd or, abbreviated to The Grampians) is a national park located in the Australian region of Victoria

The Grampians National Park  takes up 167,219 hectares and is situated between Stawell and Horsham, 260 km west of Melbourne and 460 km east of Adelaide.

The park was officially named on July 1, 1984 and on December 15, 2006 it was listed on the Australian National Heritage List for its outstanding natural beauty and for being one of Australia’s densest indigenous rock sites in southeastern Australia. 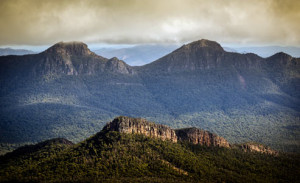 A great deal of the park’s natural beauty comes from the series of sandstone mountain ranges that run through the park’s area.

Running from west the ranges in the park take the form of low angled sandstone ridges generally running north to south.

The eastern sides of the ridges are steep and spectacular cliff faces that are beyond vertical in certain locations due to the faulting of the sedimentary layers.

The sedimentary layers were laid during the Devonian period 380 million years ago from rivers that used to run through the area.

Over time, the sediment accumulated to a depth of 7 km.  Later, the area was raised and tilted, which in turn allowed it to develop into its present form. 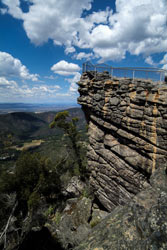 Overall, the geology of the area makes The Grampians an excellent vacation spot for geologists, or geologic enthusiasts.

The park also has a rich cultural heritage.

As previously mentioned, it is southeast Australia’s richest site of indigenous rock art.  The rock art was created by the Jardwadjali and Djab Wurrung people.

While many of the Aboriginal communities in the area have continued to pass on knowledge of their customs and traditions to others, there has also been a lot of historical cultural knowledge that has been lost since the area was settled by Europeans in 1840.

The cultural significance of the right hands prints at Gulgum Manja is now unknown.  This mystery, while unfortunate, adds additional intrigue to the rock art areas in the park. 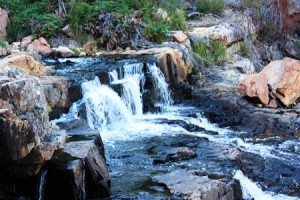 As one would expect, the park also offers an abundance of outdoor recreation opportunities to visitors.

Hiking is a particularly popular activity in The Grampians Park.

The Wonderland area, near Halls Gap, is a very popular hiking area for day trippers as they can easily stay in Halls Gap, the largest town in the park, and choose from a number of different hikes in the area.

The Wonderland area is home to the, “Grand Canyon,” on the Wonderland Loop as well as a trail to, “the Pinnacle.”  The park is overall quite popular for campers and bushwalkers due to the spectacular natural views.

Also, due to the sheer rock, cliff faces it is a very popular destination for rock climbing.  Additionally, the park is home to a number of waterfalls, especially around Mt. Williams, which is the highest peak in the park, all of which are accessible by the extensive road network in the park.

The Grampians Park is the home to one of Australia’s oldest and longest running food and wine festivals, the 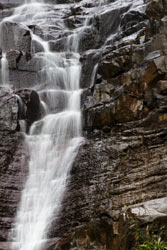 Every year, this festival is held over the first weekend in May in Halls Gap.

It is one of the hallmark events in Victoria, providing visitors with food and wine from more than 100 local artisans, live music, and a variety of other forms of family entertainment.

Halls Gap is well equipped to deal with the influx of visitors at this time.

It is the largest service town in the area and is located roughly halfway between Ararat and Stawell.

Halls Gap is located in the eastern portion of the park and offers a number of different accommodation options for visitors to the area.

END_OF_DOCUMENT_TOKEN_TO_BE_REPLACED 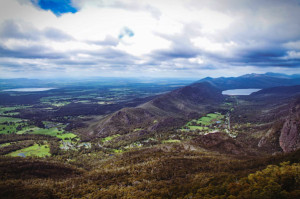 Grampians National Park – Must Visit Destination for All Travellers

The Grampians National Park (also known as Gariwerd or, abbreviated to The Grampians) is a…