Bay of Fires: When you hear Tasmania, stunning white-sand beaches with azure waters are usually not the first thing that comes to your mind. Thus the Bay of Fires area is there to prove you wrong. This slice of Tasmanian east coast offers everything from exciting wildlife and dramatic landscapes to heavenly beautiful beaches.

Bay of Fires is roughly 50 km long area on the northeastern part of Tasmania and stretches from Binalong Bay in the south to Eddys tone Point in the north.

Northern part of the Bay of Fires belongs to the Mt William National Park, while the southern section is in the Conservation Area.

The name “Bay of Fires” comes from the history when Captain Tobias Furneaux noticed multiple fires along the beaches coming from the Aboriginal people back in 1773.

Bay of Fires provides some of the most unexpected views with pristine natural environment. Soft beaches with crystal clear waters and orange coloured granite rocks are surrounded by lush woodlands.

Visitors can choose between staying in a campsite along the coast or in a lodge.

The area is perfect for activities such as beach activities, fishing, surfing, kayaking or simply camping in unspoiled natural paradise.

Bay of Fires is widely recognised as one of the most beautiful places in Australia and has been also named as world’s hottest travel destination by Lonely Planet in 2009.

Binalong Bay: Southern end of the Bay of Fires is where one of the most scenic places in Tasmania can be found. Binalong Bay is a small beachside village, circa 10 km north from St Helens.

The Gardens: Line of beaches stretching creating a conservation area stretching from the Binalong bay and around 20 km up north includes beaches such as for example Jeanneret Beach (where a protected sand dune Round Hill can be found), Sloop Reef or Taylor’s Beach.

Eddystone Point: The historic 42 m high magnificent lighthouse at the end of Eddystone Point is a biggest highlight of this picnic-perfect area situated within the Mt William National Park.

Something for everyone  at Bay of Fires

Traveler could  explore one of Australia’s most southern pristine coastlines “recognised by Lonely Planet in 2009 as the Worlds Hottest Destination”  stay in the award winning Bay of Fires Lodge.

The walking track offers extraordinary environment, where through immersion and interpretation you can share the best sense of Tasmanian wildness nature.

END_OF_DOCUMENT_TOKEN_TO_BE_REPLACED 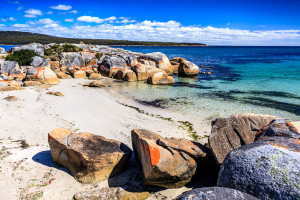 Bay of Fires: When you hear Tasmania, stunning white-sand beaches with azure waters are…