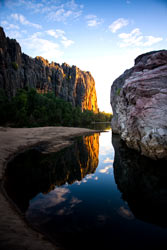 Situated 1,855 kilometres northeast of Perth and 355 kilometres east of Broome, the main feature of the park is the Windjana Gorge, which has been carved by the Lennard River over many, many years.

The gorge stretches for 3 kilometres and measures as far as 100 metres wide and up to 100 metres tall in places.

The rock in the gorge came from an old, Devonian reef system dating back some 375 million years.

This same rock formation can also been seen at Geikie Gorge and Tunnel Creek.  During the wet season, the river flows freely through the gorge.

However, during the dry season, it is nothing more than a series of pools surrounded by trees and shrubs.

Windjana Gorge National Park: What to Do

Windjana National Park offers visitors a number of different ways to enjoy the park’s natural beauty.  Despite being a relatively dry area, there is a variety of wildlife in the park.

The gorge floor is home to a variety of vegetation, including paperbarks, cadjebuts, native fig trees, and lechhardt trees.

These trees serve as habitat and feeding grounds for a variety of wildlife, including freshwater crocodiles, fruit bats, and corellas.

One of the best ways to take in the scenery in the gorge and see the wildlife, is to take on of the gorge walks.  The Gorge Walk, begins at the camping area and takes visitors through the entire gorge, creating a 7 kilometre round trip walk.

If you are looking for something a bit shorter, the Time Walk allows visitors the change to take a look at fossilized life forms in the limestone gorge walls.

Finally, the Savannah Walk along the southeastern wall allows visitors to see and experience the plants and animals of the woodlands. 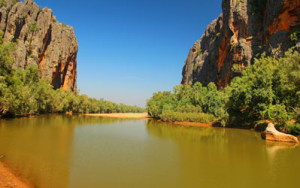 Windjana National Park is also an area of great spiritual importance to the Bunuba people.

Aboriginal leader Jandamarra, who led an armed revolt against European settlers, used the gorge as a hideout and was ultimately shot in the gorge during a shootout with European in 1894.

The park gets its name from the Bunuba people as well who belived that there were powerful creation spirits, called Wandjina, that resided in the area.

The name, Windjana, was mis-recorded by William Forrester, who had a pastoral lease over the land starting in 1884.  Visitors to the park can still visit the ruins of his homestead, which lies within the boundaries of the park.

The park also has a number of half day and day tours that allow guests to se the sights and learn about the geology, ecology, and culture of the area. 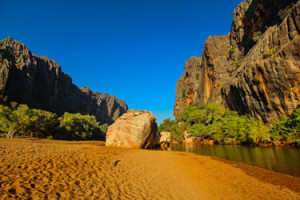 All visitors to the park should be warned that the Kimberley and Pilbara regions are crocodile country.  Both the saltwater and freshwater crocodile are prevalent in the area.

Designated campground are the only available accommodation within Windjana National Park.  The campgrounds come with a number of facilities, including toilets, showers, and fresh water supplies.

The park is accessible by road, with the closest towns being Derby, Fitzroy Crossing, and Broome.  With that being said, four-wheel-drive is recommended for access to the park as the roads are not paved. A

Additionally, the park is closed during the wet season as the roads are not passable during this time.

END_OF_DOCUMENT_TOKEN_TO_BE_REPLACED 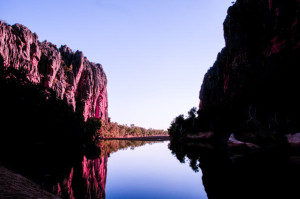