Two Peoples Bay Nature Reserve is a protected area around 35 kilometres east of Albany on the south coast of Western Australia.

The bay itself faces due east and is protected from the rough water of the Great Southern Ocean by a headland formed by the granite massif of Mount Gardiner.

The bay has two wonderful beaches that are very popular amongst visitors.

The area was originally named a nature reserve in 1967 due in large part to the fact the critically endangered Gilbert’s potoroo and the noisy scrub-bird both call the area home.

Both species were believed to have gone extinct before being rediscovered at Two Peoples Bay.

Its status as a nature reserve ensures that only, “low impact recreation facilities,” are permitted.

As such, there will never be grand tourism developments here, just the simple facilities needed to enjoy some time along a beautiful stretch of coastline.

A good place to start a visit to Two Peoples Bay Nature Reserve is at the Visitor Centre.

The Visitor Centre has a dearth of information about the local history, wildlife, and the various ongoing recovery programs for the threatened species native to the park.

During the summer, the Visitor Centre is usually open from 10am – 4pm.  During the non-peak visitor months, the centre is only open when staff are present.

However, all the informational displays are still visible.

One of the most popular ways to enjoy Two Peoples Bay is to walk along the Heritage Trail.  The trail starts at the back of the Visitor Centre and initially winds through peppermint woodland before looping back along the beach.

The walk is 4.6 kilometres and takes about two hours to complete the loop. 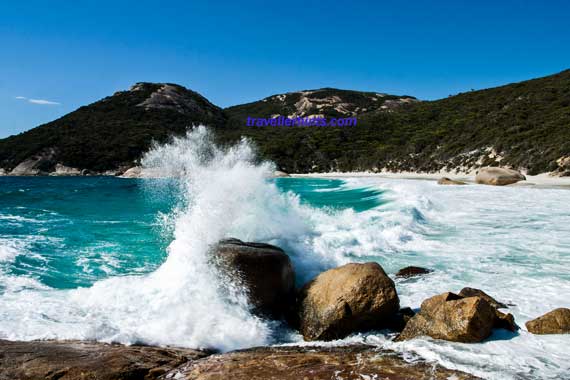 It is a Class 4, Moderately Difficult trail.  Along the trail, you are likely to see, and if not see, then definitely at least hear, the endangered noisy scrub-bird.

While it is unlikely that you will see the Gilbert’s potoroo, as there are believed to be only 40 remaining in the wild, hikers might also catch a glimpse of the southern brown bandicoot, or any of the other 70 land birds that call the reserve home.

Additionally, the trail is dotted with lookouts over the sheltered bay, where walkers can look over the beautiful beaches.

If you want a more challenging, or longer hike, there is an optional 5 kilometre return spur on the trail that leads down to the wonderful Little Beach.

Hikers should allow 4 hours for this spur.  It is a Class 3, Moderately Easy trail.

As a coastal nature reserve, there are, of course, beaches.  The main beach is much more impressive from a distance, due to the fact that the far end of the long, arcing beach is often covered with seaweed.

However, it is completely protected by Mount Gardiner, so the water is very calm and the shoreline doesn’t see the pounding surf that much of the south coast can get.

Once you make your way through the seaweed, this beach is actually quite pleasant and is a wonderful place for a nice long beach walk.

There are a number of huge boulders along the beach where visitors can find a tiny sheltered patch of sand, perfect for a private little picnic.

As you reach the other end of the beach, there are stairs that lead up a large hill.  Continue following these steps and you will be rewarded with a fantastic view of the beach.

This main beach isn’t the only beach at Two Peoples Bay.

There is also the beautiful Little Beach.  This beach is slightly less sheltered than the main beach, which means it gets a little bit more surf reaching all the way to the shore, but it also means that there is no seaweed covering the pristine sand.

As such, this is one of the more popular destinations in the reserve.

On summer’s days, it can get quite busy here, as people enjoy lounging in the soft white sand and taking in the beautiful coastline.  Little Beach is also a wonderful fishing spot.

There are two large rocks on the northern end of the beach that serve as the perfect natural platform for fishing.  The beach is also a beautiful place form which to watch the sunset.

At the southern end of the beach, there is another collection of large rocks through which a path will take you to the even smaller and more private Waterfall Beach.

As you might expect, this beach has a number of small waterfalls that trickle down its heavily vegetated lower slopes, right onto the beach itself.

Waterfall Beach is a very peaceful place and an ideal place to finish your day at Two Peoples Bay Nature Reserve listening to the parks many birds.

There is no accommodation in Two Peoples Bay Nature Reserve.  Camping is not permitted in the reserve either.  Visitors to the reserve often make the 35-kilometre trip from Albany each day.

Albany is filled with a variety of accommodation options, ranging from luxury hotels and resorts, to more affordable hostels.  Whatever your budget or taste, Albany has something for you.

However, visitors who would rather stay out of town and a little closer to nature can find wonderful campsites a little further east from Two Peoples Bay at Cheynes Beach near the borders of the Waychinnicup National Park as well as beside the Kalgan River on the Nanarup Road.

The entirety of the 35-kilometre road between Albany and Two People Bay is sealed and the reserve is easily accessible by two-wheel-drive vehicles.

The entry point to the reserve itself is down Two Peoples Bay Road, which is accessed off of Nanarup Road.

However, if you are not in any particular rush, the detour provided by the South Coast Highway to Homestead Road to the coastline via Betty’s Beach Road is more than worth it.

It will take you through beautiful forest land and provide travellers with wonderful coastal views and elevated vistas of the area.

END_OF_DOCUMENT_TOKEN_TO_BE_REPLACED 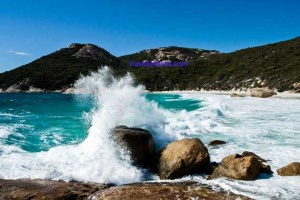