Czech Republic: The land of castles. The Czech Republic is a country known for many highlights and attractions.

It can be a land with the top class beer production, country with a delicious cuisine, country with one of the most beautiful capital cities in the world – Prague – and, also a place where historic architecture remains incredibly well preserved, allowing visitors to peek little bit down the past and observe with an open mouth.

The well preserved sites are also one of the reasons Czech Republic has some of the most beautiful castle collection from which some of them are almost out of this world. The most precious treasures are following: 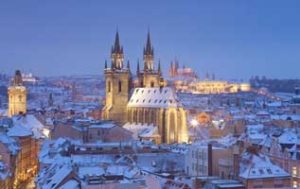 The most important castle in the Czech Republic is, indeed, the one situated in its capital. Dating back to the incredible 9th century, it has not only an incredible historic value, but since it has always been a residence of kings, emperors and nowadays presidents, it is an outstanding cultural heritage.

Prague Castle is a truly breathtaking masterpiece, especially by being the largest castle complex in the entire world (holding the Guinness Record).

It occupies an incredible area of nearly 70 thousand square kilometres. Not only thanks to that, it belongs to one of the most popular and most visited places by tourists in Prague.

The Castle represents a national symbol and creates a significant and signature feature of the city skyline. It is also a UNESCO World Heritage Site.

Apart from being one of the most important cultural institutions in the country, the Prague Castle with a past of more than thousand years also brings a huge importance in terms of history and architecture. It was constructed somewhere around the year 880 by the Premyslid Dynasty Prince Borivoj.

The complex consists of several palaces and buildings of various styles and purposes (ranging from Romanesque style to Gothic additions).

There were several reconstructions within the last century, ensuring the perfect preservation of this Prague jewel. 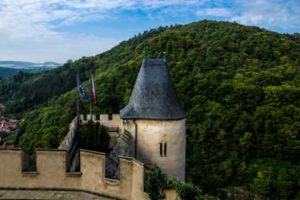 Known from a TV screen, the beautiful Karlštejn Castle was popular place for the king Charles IV.

Probably the most popular castle in the country outside of the capital city – Karlštejn Castle has a prime position among other castles in the Czech Republic.

Karlštejn was established in 1348 by Charles IV, the famous Czech king in order to serve as a storage for royal treasures and crown jewels.

The Gothic Castle located around 30 kilometres south/southwest from Prague has an outstanding exterior and layout, two tower gates ensuring the entrance and four towers in total.

The centerpiece is the major Well Tower which was the first part to be built. There are three different levels of the castle – the Imperial Palace as the lowest one, Marian Tower right above and the Big Tower being the highest.

The initial purpose of holding the Bohemian crown jewels was changed and the jewels were moved to Prague after more than two centuries.

The Castle was also featured in one of the popular historic Czech movies called Noc na Karlštejně which also helped to gain on its popularity. 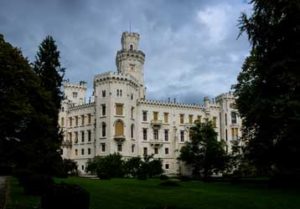 Outstandingly stunning with long history, the Hluboká Castle belongs to some of the most beautiful in Czech Republic.

The picturesque chateau Hluboká nad Vltavou initially used to be an early Gothic castle built in 1250. After years of being a private aristocratic property, the castle was then sold in 1562 to the Lords of Hradec and that meant a complete transformation into a Renaissance masterpiece. The Chateau then went through another shift into a Baroque style.

Hluboká reached its current appearance during the 19th century when some changes into the romanic style were made. Nowadays, the Castle is often considered one of the most beautiful castles in the country.

Hluboká is situated in the South Bohemian region and its owned by the Schwarzenberg family. There is also an extensive green landscape park surrounding the Chateau.

Hluboká also appeared in various movies, one of them is for instance the Underworld: Blood Wars – which can be hard to believe for such a fairytale looking place. 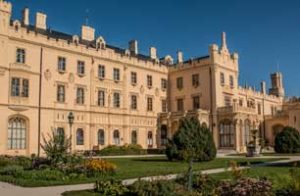 Incredible complex belonging to UNESCO, Lednice Castle will blow your mind by its charm.

A marvellous mansion Lednice is situated in the South Moravia region of the Czech Republic. Together with manor Valtice, its is listed as one of the UNESCO World Heritage Sites.

Lednice Castle is one of those places that will make you feel like in a fairytale again. The majestic Neo-Gothic style complex belongs to one of the most beautiful ones in Europe. Lednice dates back to the 13th century when it used to be a Renaissance villa, during the 17th century is served as a summer residence of Lichtenstein’s Princes.

The reconstruction came in 1858 when the look changed into a Neo-Gothic style. Some of the rooms inside of the Castle include the representative halls, rooms for small princesses and princes, the Puppet Museum or princely apartments.

The Castle is surrounded by large park and French garden, covering in total around 200 square kilometres. There you can find a Minaret viewing tower, palm tree greenhouse, Masonic Wall or a Roman aqueduct. 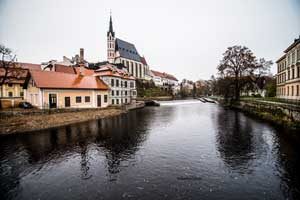 Vast Castle complex in Český Krumlov is proud to be the dominant feature of the city.

Český Krumlov is not only a beautiful city which is worth every visit, but it is also home to the State Castle Český Krumlov. The Castle was built in the early 14th century and went through several changes and reconstructions over the centuries.

Despite that, the original layout and interiors, as well as architectural details remained very well preserved. The Český  Krumlov Castle has features of both Renaissance and Baroque architecture.

Thanks to its high importance in terms of history, cultural heritage and standards in architecture, the Castle gained a status of historic monument preservation and in 1992, the whole complex then got listed as a UNESCO World Heritage site.

The entire castle complex consists of nearly 40 different palaces and buildings, making it one of the largest complexes of such kind in Europe. Nowadays, the Castle houses a museum and the Český Krumlov Baroque Theatre. 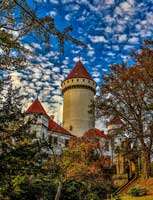 Popular among both locals and tourists, Konopiště cannot miss your itinerary in the Czech Republic.

Last, but not least, the Konopiště Castle with its excellent castle collection cannot be forgotten. Konopiště Castle is located in the surrounding of the city of Benešov, around 30 kilometres southeast of Prague.

It is a four-winged chateau with symmetrical layout in Renaissance – Gothic style built in the 13th century. Konopiště is mostly known for being the last residence of Franz Ferdinand of Austria.

The bullet which killed him during the assassination in Sarajevo in now one of the main attractions of the Castle as it is a part of local exhibit.

The Chateau is also surrounded by extensive park with peacocks, quails and pheasants. One of the popular tourist attractions is also the bearpit with its unusual bear resident just at the back entrance (one of the reminders that Franz Ferdinand was a passionate hunter).

Places to Visit in Europe