A beautiful coastline bordered by azure waters of nothing less than the Atlantic Ocean, precious landscape and nature scenery, unforgettable cuisine accompanied with top class wine experience, tender atmosphere of colourful cities.. When it comes to Portugal and naming its assets, the list could simply go on and on.

Portugal is a country in Southwestern part of Europe, located on the Iberian Peninsula. It is actually the westernmost mainland country with coastline bordered by the Atlantic Ocean.

The only mainland neighbour is Spain, divided by one of the longest borders in European Union reaching 1 214 km, all uninterrupted.

Apart from the continental part covering more than 92 000 square km, the Portuguese Republic, as the official name says, also claims several archipelagos within the Atlantic Ocean – Azores and Madeira, both autonomous regions.

The overall population of Portugal is slightly more than 10 million people speaking Portuguese as their official language. The capital city and probably also the most know one is Lisbon. Lisbon is also the largest city and serves as an important hub for country’s tourism, education, media and economy.

Portugal went through the time of its greatest fame during the 15th and 16th century, when it belonged to world’s top global economies with great military power. Also Portuguese explorers, including Vasco da Gama who discovered Brazil or South African southernmost point, positively added on Portuguese fame during those times.

Today, Portugal is a member of the European Union, United Nations or NATO (one of the founding members) and is also considered a peaceful and developed country with a great living standard.

Thanks to the Mediterranean climate and easy access to the azure ocean waters, Portugal benefits from a great popularity among tourists.

The cliffs bordering the coastline make the impression of being at the end of the world and the whole dramatic scenery is simply breathtaking.

Portuguese culture is a pleasant blend of various civilizations and influences. Medieval buildings and colourful history leave a vibrant and unique atmosphere only topped with welcoming and warm hearted locals. As a cherry on the cake, delicious wine from local wineries and world class cuisine including seafood, olives, fresh bread promise an unforgettable experience.

END_OF_DOCUMENT_TOKEN_TO_BE_REPLACED 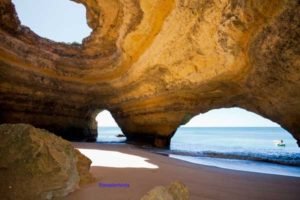 A beautiful coastline bordered by azure waters of nothing less than the Atlantic Ocean,…