Pizza and pasta could be some of the first images which come to one’s mind when mentioning Italy. Don’t be fooled by that, because this piece of South Europe is a stunning place with great combination of marvellous history reflected in cities and beautiful landscape, topped with cultural heaven which Italy truly is.

Italy is a South European country spreading across the Italian Peninsula. Having a coastline washed by waters of Mediterranean, it has borders with Vatican City (state inside a state), San Marino, Slovenia, Austria, Switzerland and France. Italy, or the Italian Republic, is home to more than 61 million people who speak Italian as their official language.

The area of Italy spreads over 301 thousand square kilometres. Italy has also hundreds of islands including for instance Sicily, Sardinia, Tuscan Archipelago or Aeolian Islands.

Rome is the capital and probably one of the most famous and impressive cities worldwide. Other famous and major cities are for example Milan, Bologna, Florence , Venice , Cagliari or Naples. Italian economy is quite large and citizens enjoy a high quality of life in their country. The country is a member of European Union, United Nations, NATO, OECD or for instance the G8.

Ancient history of the country is a time of fame and glory. Not only it is a birthplace of Renaissance and many artists and their masterpieces, the historical treasures left footmarks everywhere – all reflected as countless of UNESCO World Heritage Sites nowadays.

Including the Colosseum in Rome, the Leaning Tower of Pisa or the entire city of Venice – all those places are some of the world’s top attractions contributing to the fact that Italy is one of the most visited countries by tourists on the planet.

Needless to say, tourism has a great importance in Italian economy.

Thanks to the lengthy shape of the country, the climate is quite diverse. It varies from the oceanic and Mediterranean climate to the humid subtropical one.

Also, Italy is lucky to have both – divine coastline and world class mountain peaks (the Alps).

It is, indeed, a masterpiece comparable to Michelangelo’s artwork. Last but not least, Italy is where the most delicious dishes are made. Influenced by many during the past, Italian cuisine has unique flavours, based on the freshness of local products. Some of the world known dishes and products are for instance Italian pasta, Gelato, coffee or pizza as well as delicious Italian wine.

END_OF_DOCUMENT_TOKEN_TO_BE_REPLACED 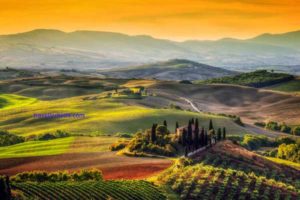