As one of Europe’s top travel destination, Spain ranks high in sunshine, fascinating cities and historic sites, and a vibrant Latin culture.

Located in southern Europe, Spain is bordered by the Atlantic Ocean and the Mediterranean, as well as France and Portugal, with a small land boundary with Gibraltar in the south.

It is the largest country by area in Southern Europe, and one of the largest by population in the European Union, with over 46 million people.

There are 17 autonomous communities, including two archipelagos, the Canary Islands to the West of Africa and the Balearic Islands, in the Mediterranean.

Spanish history has been much influenced by Roman rule, as well as further influence from Germanic tribes and the arrival of the Moors.

Since the 15th century it has emerged as a unified country, and has since spread the language throughout the world, becoming a global colonial empire.

Spain has a strong identity as a Roman Catholic nation, although it does not have an official status in law or schools and is becoming increasingly secular.

There are almost 2 million Muslims living in Spain, many with Spanish nationality who immigrated from Morocco and other African countries. Spain’s Roman heritage and Catholic influence play a major role in the country’s identity and traditional culture.

The Spanish language remains the second most spoken language in the world, and is a unifying aspect of Spanish culture and daily life.

In addition to Castilian Spanish, there are three other official languages spoken in Spain: Catalan, Euskara (Basque), and Galician.

Spanish cuisine is a huge cultural highlight. Spain has a strong national style of tapas dining and multi-course meals. They produce some world-renowned chefs and many travellers seek the best paella and sangria to enjoy on their visit.

Given the strong regional identities, many places in Spain have signature traditional dishes, such as the lobster stew of Menorca and Migas, a typical bread dish from Andalucía. “Spanish ham” is a popular cured meat that has become a national favorite.

The Mediterranean climate and access to seafood from both the Atlantic and Mediterranean make for a varied and healthy and flavorful diet.

Spain is known for its sunshine, beaches, and rich Mediterranean cuisine. It also has the third highest number of UNESCO World Heritage sites, and the most locations on UNESCO’s Intangible Cultural Heritage List in Europe.

There are a vast number of religious sites, art and architectural treasures, and historic monuments throughout the Iberian Peninsula.

Barcelona ’s Antoni Gaudi has become a symbol of the city, with incredible modernistic art and ground-breaking architectural works. Many of Spain’s official, protected sites have historical significance and ties to the Romans and Moors.

Given Spain’s strong cultural identity, rich cuisine, and good weather, it is a huge destination for travellers.

From the great cities of Madrid and Barcelona, to the internationally recognized historic sites throughout the country, Spain has so much to experience and enjoy.

END_OF_DOCUMENT_TOKEN_TO_BE_REPLACED 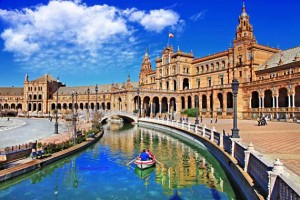 As one of Europe’s top travel destination, Spain ranks high in sunshine, fascinating…