Because of its extraordinary natural splendor and ecosystem, it has become the beach and Island destination in the Philippines.—CNNGo

El Nido, also known as the Philippines Last Frontier, is composed of 45 Islands and islets and each has its own exclusive geological formations. It is located in the northernmost tip of mainland Palawan. It is bordered by three different seas: the Sulu Sea in the east, the South China Sea in the west, and Linapacan Strait in the north.

The first Spaniards, who came there to settle, named the town Bacuit. Later then it changed to El Nido, which comes from the edible nests of the swiftlets (Nido means nest in Spanish). It is locally known as Balinsasayaw found in the fissures of its limestone cliffs. The nest is known as the main ingredient for the gourmet nido soup and is very expensive. 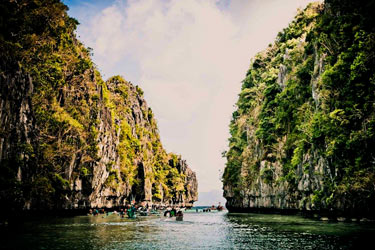 El Nido used to be rather remote from most of the islands in the Philippines. It was until when an unexpected event took place in Bacuit Bay, leading to its discovery in 1979.

Anyway, the story goes as follows: “back in 1979, a group of divers got their dive boat’s propeller disabled by a tuna line in the middle of the night.

They didn’t have any choice but to drop an anchor on an islet. As daybreak came, the divers were astounded by a magnificent scenery as they woke up.

Towering dark sea cliffs, white sand beaches, lush green forestry, glistening teal-colored water and above it runs a series of marvelously nature-carved islands. After 4 years of discovery, in 1983, the first dive station was established in Miniloc Island by the group of divers who discovered the island. However, the major tourism commenced when a Filipino-Japanese joint venture company, named Ten Knots Development Corporation, opened a diver’s resort and an airstrip (Lio Airport) at Villa Libertad on the mainland.

In 1984, the Philippine Government made the entire area of El Nido Island a turtle sanctuary. Later on, it turned into a marine reserve park (1991), and in 1998 into a managed resource protected area. These all are in recognition of the significance of its exceptional ecosystem.”

Palawan was chosen as one of the best travel destinations in the world. It is a recommended destination inCalamianes Islands. Besides, it was portrayed in the National Geographic Traveler’s Magazine, November-December issue. Further in CNNGo, the travel news website of CNN, Cable News Network, a prominent international news agency. In 2012 El Nido was declared as the “Best Beach and Island Destination” in the Philippines.

Dotted with islands and islets, Bacuit Bay is the most inhabited. It has clear blue waters that are heaving with magnificent 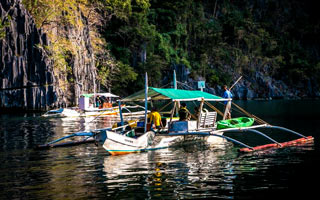 Bacuit Bay has over 30 different dive sites ranging from 6 meters to more than 30 meters in depth.

Makaamo Lagoon is also fascinating. One of the nature trails lead to this mangrove-surrounded saltwater lagoon that is best enjoyed during the sunset or sunrise in silence.

A beach in Cadlao Island may be recognized by visitors as one of the settings of the Scandinavian TV show – Robinson Expedisjonen, the forerunner to Survivor. It is located in the north-east part and it is good spot for snorkeling.

Dilumacad Island is also known as the Helicopter Island because of its limestone cliffs that resemble a helicopter viewed in a significant distance. The island is ideal for picnic lunches during island hopping.

It has an underwater tunnel and a fringing reef on the southern end. The island that is ideal for sand bathing, sunset watching and other beach activities is the island of Pangulasian. It stretches up to 750 meters of powdery white sand. Cluster of coral reefs make this area another good place for snorkeling and diving.

There is a trail in the middle of the island that ends on a spot allowing you to witness a 360-degree view of Bacuit Bay and nearby islands. Snake Island or the Vigan Island got its name because of the fine natural sandspit, (s-shaped sandbank). It is only visible clearly during the low tide. Those are perfect spots as shallow swimming areas.

Cudugnon Island is an anthropological site. Dating back to the Song Dynasty (960-1279 CE), this island is where jewelries and pottery were yielded.

Anthropologists believe that the cave inhabitants were from Borneo. They trekked through the prehistoric land bridge that once connected Borneo to Palawan. Matinloc Island, on the other hand, is the longest slim island in El Nido, It is a white sand beach beside a sinkhole, it is enclosed by steep rock walls, and it is inaccessible by boat, though. The way to reach it is to swim underwater and through a constricted crevice in the rock wall.

The locals refer to it as the secret beach of the Island. At noontime, a stream of light shines through the passage. Another beach that the island is famous for is the Kulasa Beach. It’s a 100-meter beach with a sliver of fine white sand.

The island has 4 dive sites and the deepest is 39 meters. A cathedral-like cavern, accessible by yacht and kayak, lies within the Pinasil Island. The cool interior of the cavern is lit by sunlight at certain times of the day that comes through the opening of its peak.

This place is one of the most important sites for the birds’ nest collector, locally called busyador. Other must see places are: the Aberawan River, where egrets settle among the mangrove trees; Ille cave, where traces of old civilization was found; Nacpan Beach, which exhibits a 4 kilometer stretch of white sand beach and immaculate cerulean waters.

Poblacion is a town where visitors can buy souvenirs and gifts. Last, but not least, the Balay Tubay is a very old house (90 years old), which turned into a bar displaying paintings and handicrafts of local artist. For those who visit to eat or shop, there are different establishments that will satisfy all their needs.

END_OF_DOCUMENT_TOKEN_TO_BE_REPLACED 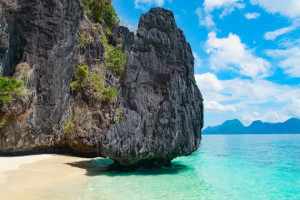 Because of its extraordinary natural splendor and ecosystem, it has become the beach and…