When it comes to natural beauty, there are few countries that offer more than Iceland. As such, it should come as no surprise that various forms of outdoor recreation are the primary attraction for many of the people who choose to holiday in Iceland.

HIKING ICELAND! It is very common for tourist to come and make their way around the “Ring Road” camping and stopping off at all the wonderful sights along the way. Here is a quick guide for anyone who hopes to spend at least part of their Icelandic holiday hiking in the beautiful southern highlands. 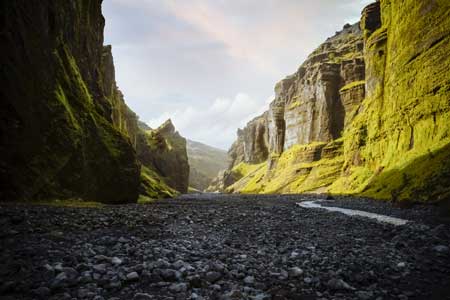 The Laugavegur Trek has become both Iceland’s most famous, and most difficult hiking trek.  Measuring 55 km between the towns of Landmannalaugar and Þórsmörk, the Laugavegur Trek offers hikers every possible Icelandic view they could ask for, from great glaciers to roaring hot springs, to big rivers and lakes.

For most, the hike will take four days and while the hike is fairly difficult, to begin with, the difficulty of the trip varies greatly depending on the weather conditions.

Assuming you are taking this route, the highest point on the hike occurs on the first day where you will climb to an elevation of around 1,100 metres.  It is important to remember that due to Iceland’s Arctic climate, this translates to over 3,000 metres in the European Alps.

Due to its location in the southern highlands, 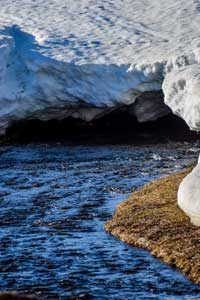 the trail is only serviced for a few weeks a year.  It is asked, both for safety and conservation concerns, that hikers not try and hike the trail when it is not serviced.

Along the trail, there are six huts for guests to stay in should they desire.  If the huts are full, or they would rather camp outside, there are also campgrounds at the huts where they can stay.

During the peak season, the huts fill up quickly and it is recommended that you make your reservations several months in advance, both for the huts themselves and for the surrounding campground.

Wild camping is not allowed and as such, it is very important that you get your reservations early.

Food cannot be bought.  The campgrounds offer the use of toilet facilities, running cold water, hot showers, and garbage facilities.  They do not offer any use of the hut facilities. 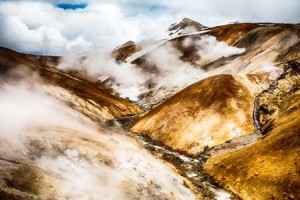 Hikers on this track should come prepared for a variety of different temperatures, including freezing cold and snowing, and warm and sunny.

They should also note that the weather can range from freezing cold, with horizontal rain, and now view, or warm and sunny, with spectacular views.  Additionally, around 100 people begin the hike each day in the peak season of July and August.

Perhaps the second most popular hike in Iceland is the trek between Þórsmörk and Skógar, also in the southern 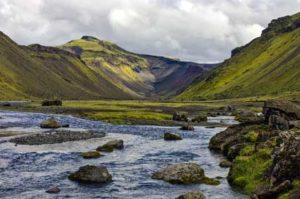 highlands.  This hike, over Fimmvörðuháls, offers hikers the opportunity to see some spectacular natural sights and geologic features.  The trail runs from Þórsmörk up through two different glaciers and over the new lava formed from the 2010 eruption of Eyjafjallajökull.

In fact, this trial marks the sighting of the first phase of the Eyjafjallajökull eruption.

After traversing the newest lava in Iceland, the hike passes by the two popular craters Magni and Móði before descending towards the lowlands on the southern side of the craters.

The trail ends at the spectacular Skógarfoss waterfall, not far from the coast of the Atlantic.   the total distance of the hike is 22 km.  The altitude fluctuates between 150-1,100 metres.  The maximum ascent is 1,000 metres.

This hike is possible to do in about 8-10 hours, but many people split the trip into two days and stay at one of the two mountain huts on the route.  It is important you make reservations for this huts well in advance if you want to make the hike a multi-day experience as they fill up very quickly.

The trail is usually passable without special equipment from mid-June to September, however, you might need an ice axe to cut steps from Þórsmörk and you could also possibly need crampons.  Always come prepared for rain or snow, poor visibility, and cold weather. 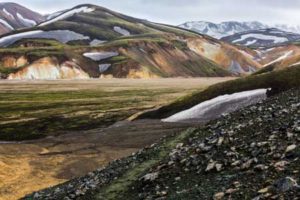 The Canyon of Fire hike takes you through one of the greatest volcanic regions of the southern Icelandic highlands.  The Fire Canyon runs between the area of Skaftá river and Eldgjá “Fire Canyon.”

The hike begins in the Vatnajökull National Park at Sveinstindur Mountain by Langisjór Lake.

The trail then runs along the Skaftá River through an expanse of bright green moss covered lava formations, waterfalls, canyons, and impressive craters.

The hike then goes by the Eldgjá fissure, which was created during one of recorded history’s most impressive volcanic eruptions in 934 AD.

This is the actual, “Fire Canyon,” and it is the largest volcanic canyon in the world, at 270 metres deep and 600 metres wide at its widest point.

The original eruption that created this fissure is regarded as creating the largest flood basalt in recorded time, with the lava reaching an area of around 800 square kilometres.  It is estimated that around 18 cubic kilometres of magma came to the surface.  The canyon has a beautiful waterfall called Ófærufoss.

Those who wish to partake in this hike should come prepared for rapidly changing weather that can range from warm and sunny to freezing cold, windy, and rainy or snowy.

The total distance of the hike is 36 kilometres, the altitude ranges from 400 – 1,050 metres, and the maximum ascent is 450 metres, thus making this hike easier than the other two in terms of elevation change.

There are mountain huts along the way.  Reservations should be made well in advance if you hope to make this trek during the peak season.  It is recommended that hikers only attempt this hike during the summer months.