Known as one of the largest recorded limestone formation, Coron Island has been continually giving the country high standard when it comes to tourist spot destinations.

Large parts of Coron Palawan Island are covered by Barangay Cabugao and Banuang Daan, Municipality of Coron in Palawan. It is also a part of the Calamian Islands which is it’s the third-largest in northern Palawan, Philippines. It is also called Bundok Calis or Mount Calis because it is made up of limestone.

The kind of limestone is almost Permian and from the Jurassic era. The island of Coron Palawan is among the nominees in the Tentative List of UNESCO World Heritage Sites in 2006. 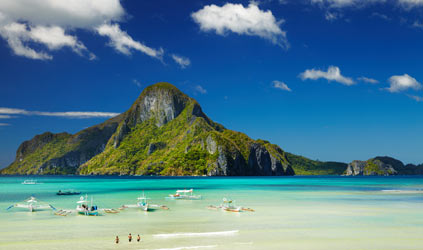 The distance between the Philippines’ capital city of Manila to Coron Palawan is the same as from Puerto Princesa City, the capital of Palawan, to Coron Island. Ravines and steep rocks stretch 600 meters from sea-level in Coron Island.

There are several hills on the island, a small part of the island with the land is the residential and agricultural lands of indigenous Tagbanua. Every cave on the island is a home for the Balinsasayaw bird (edible-nest swiftlet), a rare bird in the Philippines. A Tagbanua family that owns them takes care of the cave.

The bird’s nest is very popular as the main ingredient of the Chinese cuisine, Bird’s Nest Soup. The island is also a natural habitat of the Philippine cockatoo. The island is rich in vegetation.

Coron Island is the only island that has eight huge and three small lakes connected to the sea. Their waters are very clear, deep and considered sacred by the Coron Tagbanua.

There are few white sand beaches on the island which are covered with thick mangrove forests. Coron Palawan Island is surrounded by clear, glistening, green and blue seawater that is said to be the best water for reproduction and cultivation of the South Sea pearls.

Though there are pearl farms in the area, the actual location is never disclosed. There are also coral reefs around the island. Huts of the Tagbanuas will be seen on the island which began to dwell there a few centuries ago.

If you aim to see and experience the breath-taking tourist attractions such as Lawa Kayangan or the Blue Lagoon, they are 30 minutes away 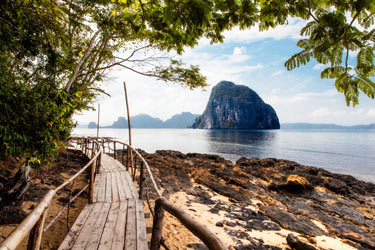 from the Municipality of Coron. Tourists and visitors have to pay Php 200.00 entrance fee to the lake where limestone formations can be seen.

From the dock of Kayangan, it will take a 10 to 15 minutes walk climbing the steps of the hill and a few minutes more down to the Kayangan Lake. There are platforms on the side of the lake where visitors can walk.

The clear, flawless, emerald-coloured water will give you the experience of seeing what’s underneath the water with a depth even over 10 feet. You can also swim in its waters and a cave beside it has stalagmites and stalactites.

Banol beach is the smallest beach among many other beaches in the Philippines, but it also has white sand and a very clear water. There are cottages that can be rented and food can be prepared and cooked by boatmen who also serve as tour guide.

Tourists can enjoy snorkelling and kayaking but should be careful of the sea urchins.

During the low tide, those who don’t know how to scuba dive can enter the inner lagoon of the Twin Lagoons, which are in between a limestone formation and are connected by a small narrow pathway. The water in the inner lagoon is cooler than the outer lagoon where most sea urchins are.

You can also visit Tanigue Lake and Barracuda Lake nearby Kayangan. Scuba diving enthusiasts visit Barracuda Lake, this is the craziest dive site in the Philippines. The first four meters of the water surface of the lake is warm fresh water, under the four meter is saltwater. The lake has an inconsistent temperature.

The deepest part of the lake, which is 34 to 35 meters deep, has a chocolate coloured water caused by the tannic acid from the leaves that fall into the lake. Until now, there are still Barracudas in this lake and they usually come out when the temperature of the water is high. Ten minutes from the island is the Siete Pecados, a cluster of seven small islands. The corals and the fish living there can be seen by everyone with the guide.

The best-known dive spots are the Coron wrecks. Most of these wrecks are parts of the Japanese Army ship that had been sunk by the American army in the bay of Coron in 1944. Soon, coral reefs grew on what’s left of the wreckage and became a habitat for different kinds of fish. This is the perfect place for deep-sea diving.

There is a cave under Barracuda Lake that is connected to the sea, only up to 40 meters deep dive is recommended if you want to see the place. The Cathedral Cave is found in the limestone walls of the island which divers can only dive 10 meters deep. It is dangerous to dive here when the waves are big.

END_OF_DOCUMENT_TOKEN_TO_BE_REPLACED 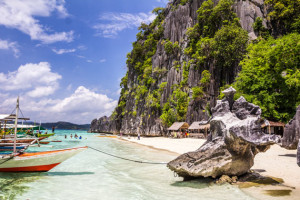 Known as one of the largest recorded limestone formation, Coron Island has been continually…