Greenpoint is located about 3 kilometres south of Titahi Bay on New Zealand’s South Island.  Also referred to as Komanga, Greenpoint is accessible by a coastal walk from Titahi Bay to Open Bay.  The area gets its name from the emerald green rolling hills in the area that extend out into the water to a point at Greenpoint.

The first landing at Greenpoint came in the 10th century.  The point held a very advantageous position as it was sheltered by the prevailing northwesterlies in the area.  The site was eventually occupied by the Ngati Ira people who built a significant headland called Komanga Rautawhiri.

This headland had a strategically advantageous location overlooking the Cook Strait.  After the 1800s the area became a popular visiting spot and sheltering area for ships.

It also became the site of a Maori series of Maori struggles as they fought for the strategically located Greenpoint as they jockeyed for territory. 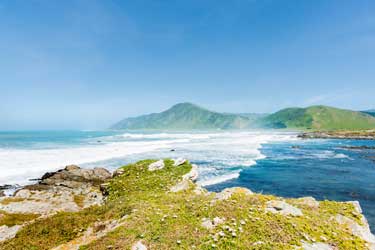 Also during the 1800s, the area became a base for whaling boats.  It is reported that in 1847, one boat with a crew of only eight men brought in 10 tons of whale oil and thousands of pounds of baleen.

The Greenpoint reserve is home to a fascinating ship graveyard.  A variety of fishing and oyster boats, tugs, and passenger vessels were beached on the sand banks during high tide and have been left there to rot ever since.  A number of the ships are still visible during low tide.

If you don’t mind getting a bit dirty, there are some you can even walk up to during low tide and investigate yourself.  The graveyard really is an eerily beautiful and unique sight, and it adds an interesting twist to your walks along the water at Greenpoint.

This is a short and easy walk that is only about a five minute drive south of the town of Bluff.  It is not a loop, but it is only about one kilometre each way.  The walk will take the average walker around 30 minutes to complete.  However, if you take time to take in the sights along the way, it could take closer to an hour.

This walk will take you along the coastline and will allow you to walk by the interesting Greenpoint Reserve Ship Graveyard.

As such, this walk is best done at low tide when you will be able to see most of the ships.  Additionally, the coastline is filled with beautiful wading birds at low tide.  During low tide, walkers might see oystercatchers, shags, herons, and royal spoonbills, among others.

This track also makes for a great picnic spot.  Visitors can overlook the shipwrecks, bird watch, and enjoy the views out over Bluff Harbout while they enjoy their meal.

Those hoping to visit Greenpoint should look to stay in the nearby towns of Bluff or Invercargill.  Bluff has a variety of accommodation options and Invercargill, only a 25-minute drive away from Bluff has even more.  Between these two locations, there is sure to be an option to suit every taste and budget.

The closest airport is in Invercargill which is serviced daily by Air New Zealand from Wellington and Christchurch.

END_OF_DOCUMENT_TOKEN_TO_BE_REPLACED 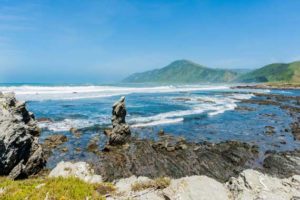