BAY OF ISLANDS: EXPERIENCE SOME OF THE BLUEST SKY IN THE WORLD IN A BEAUTIFUL ISLAND SETTING

The Bay of Islands represents a very culturally significant area in New Zealand for the Maori people.

The area was first settled by the Maori around 700 years ago when the Mataatua, one of the large Maori migration canoes, landed at the Bay of Islands.  The canoe had been sailed to New Zealand from Hawaiki by Puhi, a progenitor of the Ngapuhi iwi tribe, which is the largest in all of New Zealand today.

As the Maori settled and multiplied, new tribes began to form on the many islands in the bay.  Over the course of history, many notable Maori were born in the Bay of Islands. 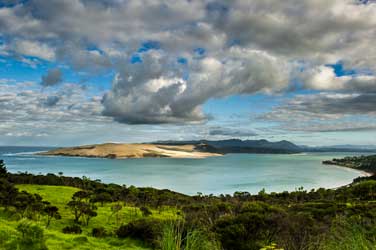 As is the case with most places in New Zealand, the first European to reach the area was Captain Cook, who arrived in 1769.  In fact, despite its significance to the Maori people, the Bay of Islands was one of the first places in New Zealand to be settled by Europeans.  The area became a popular whaling settlement at the end of the 18th century and by 1814, the missionaries had arrived.

Fun fact, a 2006 study found that the Bay of Islands has the second bluest sky in the world, trailing only Rio de Janeiro.

What to Do – Bay of Islands

With so much Maori history in the Bay of Islands, visitors have to take part in some of the cultural attractions the bay has to offer.  Perhaps you can start with a trip to the Waitangi Historical Reserve.  Waitangi is the location at which the treaty was signed between the Maori and the British.  As such, it is one of the country’s most significant sites.  Back in 1840, the Treaty of Waitangi was signed between the British crown and over 500 Maori.

Under the terms of the treaty, New Zealand became a British Colony.  Today, the treaty grounds remain as a historical site at which visitors can learn about the native Maori culture, their history, New Zealand’s history, and the history of the Bay of Islands.

The reserve is home to one of the largest Maori war canoes in history, a replica of the treaty, a fully carved Maori meetinghouse, and daily kapahaka performances.  The reserve is also home to a hotel, complete with a restaurant and bar.

The name of the harbour literally translates to, “the place of Kupe’s great return.”  Many Maoris trace their heritage back to Kupe, a legendary Polynesian explorer who is credited with founding New Zealand.  The Maori claim that Kupe’s first landfall in New Zealand occurred at Hokianga Harbour.

Visitors can also trek to the Waipoua Forest.  Of all the kauri forests in New Zealand, and there are many, Waipoua is the most famous.  It is the largest remaining tract of forest in Northland and it is a seemingly endless world of giant trees and fascinating wildlife.  The forest is also home to Tane Mahuta, the largest kauri tree in all of New Zealand.  The tree is around 2,000 years old, and it is still going strong.  The tree measures almost 4.4 metres in diameter and it is a whopping 18 metres before you even reach its first branch. 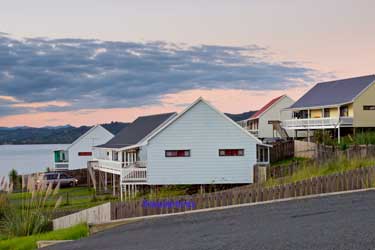 Of course there is a wide array of wonderful water based activities in the Bay of Islands.  As previously mentioned, the area is home to some of the world’s best big game fishing, thus making it every angler’s paradise.  It is also a very beautiful spot for boating, yachting and cruising.  There are a number of tour operators that run cruises to a number of different scenic spots in and around the islands.  In fact, boat is one of the best ways to experience the Bay of Islands.

If you want an aerial view, there are also a number of tour operators that run scenic flights over the islands.  Taking it all in from a bird’s eye view really is a beautiful way to experience the Bay of Islands.

The Bay of Islands is filled with interesting towns that are great for either a home base during your visit, or just a day trip.  Arguably the main town is Paihia.  The town is filled with an extensive selection of accommodation options, great restaurants, and a reasonably sized town centre.

From Paihia, visitors can also arrange boat trips to the other islands, enjoy some fishing, or catch a ferry to Russell.  Some of the best adventures in an around Paihia include cruising to the, “hole in the rock,” at the tip of Cape Brett, finding dolphins, and sea kayaking tours, all of which are not only possible, but common around Paihia.  Paihia is just down the road from the Waitangi Treaty Grounds and an impressive waterfall and boardwalk at Haruru.

One of the other main towns in the Bay of Islands is Russell.  Russell is the country’s first sea port, as well as its first European settlement.  As such, the town is filled with rich nautical, and general New Zealand history.  The town has retained its original layout from 1843 and the streets in the city centre have even retained the same names.  Visiting Russell is really like taking a trip back in time.

Kerikeri is a bustling little town filled with galleries, cafes, and boutique, gourmet food shops.  Kerikeri was once the home of the feared Maori chief Hongi Hika, who ran the north islands like a dictatorship in the early 1800s.  Kerikeri is also the gateway to the stunning Puketi Kauri Rainforest.

END_OF_DOCUMENT_TOKEN_TO_BE_REPLACED 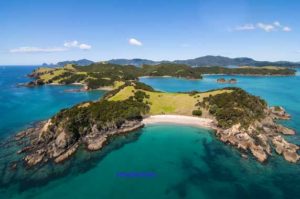 BAY OF ISLANDS: EXPERIENCE SOME OF THE BLUEST SKY IN THE WORLD IN A BEAUTIFUL ISLAND SETTING