DUNEDIN: QUITE SIMPLY, A MUST VISIT FOR TRAVELLERS TO NEW ZEALAND

The principal city of the Otago region, Dunedin is the second largest city on the South Island of New Zealand and the seventh largest urban area in the whole country.

Dunedin was the largest city in the New Zealand between 1860-1900 and as such, is full of native, New Zealand history.

The town is home to the University of Otago, which is well known within the country for being the first university in New Zealand when it was established in 1869. 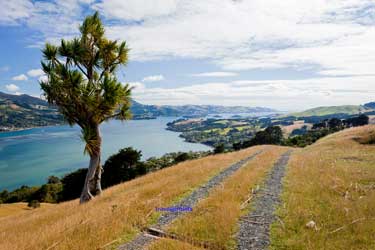 The university has a huge presence in the city, with students accounting for a large percentage of its population.

In 2014, Dunedin was designated as a UNESCO Creative City of Literature.

Dunedin is filled with activities for visitors to the area.  Benefiting from wonderful natural resources as well as a bright, vibrant, and well-cultured city scene, Dunedin is the ideal playground for both nature lovers and “city” lovers alike.

Dunedin is situated on the stunning Otago Peninsula.

Home to fur seals, sea lions, yellow-eyed penguins, and the world’s only mainlaind albatross colony, the Otago Peninsula is a wildlife viewer’s paradise.

In fact, Dunedin has been regarded as a birdwatching destination.  The city is nestled between native forestland that is particularly rich in food thanks to nutrient rich offshore currents. 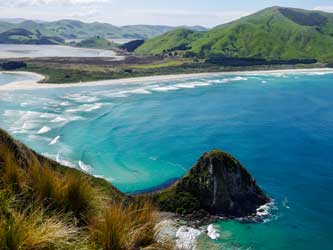 This wonderful location has allowed Dunedin to become the wildlife capital of New Zealand.

In addition to the albatrosses and penguins, which get most of the attention from visitors to the area, there is also wide array of both endemic and migrant bird species.

Birdwatchers will relish a trip to the Orokonui Ecosanctuary, where resident species mix with a variety of rare and endangered species.

Birdwatchers can also enjoy taking in a variety of wetlands birds at any of the many estuaries in the region.

Blueskin Bay, the Waikouaiti River at Karitane, Aramoana, and the Kaikorai Estuary are all particularly rich feeding grounds for an array of seabirds as well as waders.  From bar-tailed godwits, to oystercatchers, to Caspian terns, the list of bird species on the Otago Peninsula around Dunedin is nearly endless. 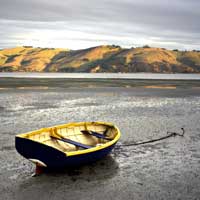 Birds aren’t the only wildlife found in and around Dunedin.  The area is also home to the New Zealand Fur Seal, which is found in abundance on the Otago Peninsula and near Dunedin in particular.

Likewise, the New Zealand Sea Lion, also known as the hookers sea lion, can also be found in the area.

The New Zealand Sea Lion is very rare and can only be found in New Zealand.

In fact, the New Zealand Sea Lion is one of the rarest, and most threatened species of sea lion in the world.

Visitors should note that these sea lion are very protective of their territory and as such, they should be given their distance.

Reptile lovers will enjoy the chance to see the tuatara.  This particular reptile is part of a 230 million year old group of reptiles that was eradicated in other parts of the world over 100 million years ago.

78 of these creatures are currently living in the wild at the Orokonui Ecosanctuary.  The tuatara are a truly rare creature that can’t be found anywhere else.

As previously mentioned, Dunedin has a rich, and vibrant history.  The city is home to some beautiful architecture, most of which carries a significant story as well.  Below is a quick guide to the historical buildings in Dunedin.

Dunedin is home to the Old Bank of New Zealand, which was completed in 1882.

Designed in a Venetian Renaissance style, the exterior is some beautiful carvings of New Zealand plants and landscapes while the interior was renovated in 1958. 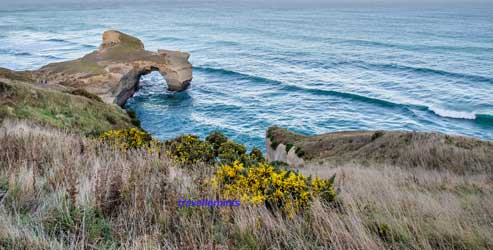 Also located in Dunedin is the Consultancy House.  When it was erected in 1910, the methods used in constructing the building were revolutionary.

The two main facades were built in a Romanesque style and while the same regulation did not exist back in 1910, the building has proven, over time, to be earthquake and fire resistant.

Dunedin Prison, was completed in 1898, at which point it was the second gaol in Dunedin.  The architect, John Campbell was inspired by London ’s Scotland Yard.

The building is covered with exceptional architectural details, making it, arguably, the most beautiful prison in the world, for what that is worth.

The prison was recently sold to the Dunedin Prison Charitable Trust with the intention of transforming it into a tourist attraction.

The Dunedin Railway Station is a truly stunning building, built in an Edwardian style in 1906.  The building has the distinction of being the most photographed building in New Zealand.

The building has a number of distinctive features, including a domed portion on the SW corner of the building, the tiled arches that surround the ticket booths, and a beautiful set of stained glass windows of locomotives.  The building is also situated in a stunning garden that is meticulously manicured.

Dunedin is also home to the First Church of Otago, which was completed in 1875.  The construction originally began in 1867.

The gothic style face of the church was completed in 1873.  However, after completion, the head architect noticed that the spire was both too short, and was leaning to one side.

As such, the spire was dismantled and rebuilt.  Now, the church stands as a beautiful example of gothic architecture. 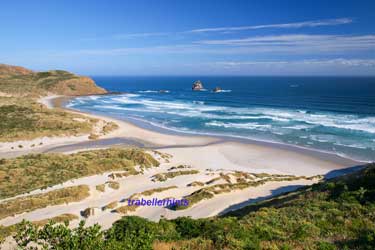 Larnach Castle is a must see for visitors to Dunedin.  The castle is situated high above the harbour and is well known for its expansive 14 hectare garden.

The garden has been recognized as a Garden of International Significance.

William Larnach commissioned the castle in 1871 and it remains the only castle to ever be commissioned in the country.

Now, the castle is a popular tourist destination and a very popular place for High Tea.  The castle boasts wonderful views over the city of Dunedin, the harbour, and the surrounding Otago Peninsula.

The Law Courts are another wonderful example of gothic civic architecture.  In fact, they are one of New Zealand’s finest examples of such architecture.  The building was completed and opened in 1902.

The Municipal Chambers were completed in 1880 and have been altered, many times throughout their time.  The building’s front steps were replaced in 1919 and the bell tower followed suit in 1963.

The chambers are home to an impressive organ pipe built in 1919 and they were also the site of the first incorporated City Council in New Zealand.  Now, the building contains the Dunedin Town Hall.

Another fantastic architectural site is the Olveston Historic Home.  This home is filled with wonderful art, heritage, and history.

The house is lavishly furnished with artifacts, furniture, and art from all over the world.  The home is a 35-room Edwardian mansion that was originally designed for one of Dunedin’s most promising businessmen, philanthropists, and art collectors during the early 1900s.  Eventually, the home was gifted to the citizens of Dunedin in 1966 with all the wonderful furnishings and pieces of art included.

Hardly anything inside the house has changed since it was originally inhabited and the surrounding garden has been named a Garden of National Significance.

Otago Boys High School was founded all the way back in 1863.  While building that stands now was not the original site, it still dates back to 1885.

The building, like so many in Dunedin, was built in a gothic style.  The school is still operational and has an impressive list of alumni.  The school boasts a wonderful view of the city of Dunedin.

St. Paul’s Cathedral is another interesting piece of architecture with an interesting story.  The building was completed in 1919, although it was never really fully completed.

Construction began in 1915 only for money to run out before the crossing and chancel were finished.  The cathedral is now a fascinating spot to visit at the top of the city’s Octagon.

Finally, there is the University of Otago Registry.  The design for the resgistry was determined by a contest and the construction was completed in 1879.  There was a subsequent addition to the original building in 1883 in order to accommodate the growing university.

The clock tower is the most famous feature of the building and it can be seen from quite a way away in Dunedin, serving as an identifier for the University of Otago. 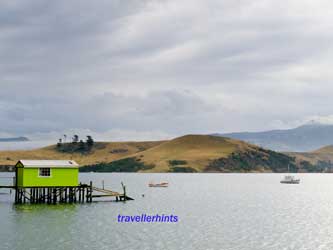 In addition to the many historic buildings, there are also a few fascinating museums for visitors to enjoy.

The Otago Museum contains a variety of wonderful geologic artifacts that were originally collected during the Geological Survey of Otago.

The museum is also filled with over 1.5 million objects from all around the world that serve to tell visitors more about the Earth and the universe as a whole.

The Toitu Otago Settlers Musuem is a great place for visitors to learn more about the history of the settlers of the Otago Peninsula.

Dunedin has a vibrant art scene, as evidenced by it being named a UNESCO City of Literature.  One of the best attractions for art and culture lovers is the Dunedin Street Art Trail.

The city has embraced street art for some time now and many of the blank walls in the city have been transformed into stunning works of art by a number of both local and international artists.

Artists who have travelled to Dunedin for the opportunity to display their art on the streets of the city include ROA (Belgium), Pixel Pancho (Italy), Phlegm (UK), Natalia Rak (Poland), Dal East (China), and Mica Still (New Zealand).  The trail currently consists of 25 walls and takes around 90-minutes to complete.

If you prefer more traditional art, then Dunedin also is home to a variety of different Galleries displaying wonderful work.  The Dunedin Public Art Gallery, which holds the county’s oldest public art collection.

The gallery has a wonderful balance of old masters as well as contemporary artists.  Gallery De Novo, the Artist’s Room, Milford Galleries, the Hocken Library, and Brett McDowell Gallery are all great galleries for art enthusiasts visiting the area to stop by as well.

If you like music, Dunedin has a thriving independent music scene that originally rose to prominence in the 1980s and the 1990s.  The Clean, The Chills, The Verlaines, Straitjacket Fits, Sneaky Feelings, and the 3Ds all became quite populare in both the United States and Europe during their prime.

Dunedin is filled with a variety of accommodation options ranging from basic backpacker hostels to luxurious resorts.  No matter what your budget or taste, there is something for you in Dunedin.

Dunedin is home to an airport that has year round service to Auckland, Christchurch, Wellington, and Brisbane.

END_OF_DOCUMENT_TOKEN_TO_BE_REPLACED 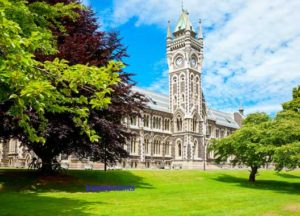 DUNEDIN: QUITE SIMPLY, A MUST VISIT FOR TRAVELLERS TO NEW ZEALAND