Simplicity, Buddhist influence, sacred places and traditional values. Myanmar is one of those countries that will let you think about your own life in a different way.

Myanmar, sometimes also known under the name Burma, is a state with sovereignty located in the Southeast Asian region.

Officially, the Republic of the Union of Myanmar is surrounded by its neighbours China, Thailand, Bangladesh and India.

Myanmar’s coastline represents almost two thousands kilometres of uninterrupted line of beaches and bays by the Andaman Sea and Bay of Bengal.

Myanmar covers a total area of more than 676 square kilometres and its population reaches more than 51 million people. The official language is Burmese and the predominant religion is Buddhism.

The capital city of Myanmar is Naypyidaw, although the largest and most populous city is Yangon (which used to be the capital before that).

Naypyidaw is a planned city, constructed in 2006 with the purpose of serving as a seat of government. Myanmar is also a member of ASEAN (Association of Southeast Asian Nations).

Myanmar is a country with a great finds of gems, mineral sources, natural gas, oil and jade.

The history of Burma dates back to 9th century with several kingdom taking over the area, binging Buddhism and making it the dominant religion.

The 19th century brought the British colonization, followed by the independence in 1948.

The New nation, although independent, has been going through number of bloody civil wars causing several human rights violations.

The biggest beauty of this country is treasured in its past, its people and its charming ambience.

The simple live alongside beautiful nature and architectonic treasures will surprise you.

Myanmar’s cuisine is a delicious treat full of fresh fish and other seafood and other product, incorporating also wide use of salads, rice and noodles.

Preserved Buddhist sights and sacred places of Myanmar are like a dream for every traveller. Some of the most famous sights in Burma are the Bagan Temples, Shwedagon Pagoda or Htilominlo Pahto.

END_OF_DOCUMENT_TOKEN_TO_BE_REPLACED 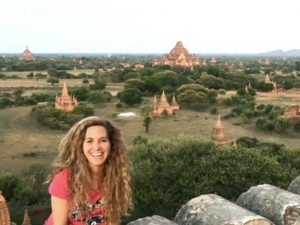 Simplicity, Buddhist influence, sacred places and traditional values. Myanmar is one of…