The complicated past does not have a single influence on the superior cuisine, endless hospitality of locals or the gorgeous scenery of the Pakistani nature. Come and experience on your own!

Pakistan is an Asian country located in the South region of the continent. The Islamic Republic of Pakistan has an access to the Arabian Sea coastline and borders with India, Afghanistan, Iran and China.

The total area of the country is almost 882 thousand square kilometres. With the population over 200 million people, Pakistan is one of the most populous countries in the world. The dominant religion is Islam and there are two official languages: English and the Urdu language.

The capital city of Pakistan is Islamabad.

Islamabad is far from being the largest city but has still an important role, especially for the politics (government seat) and economic. On the other hand, the largest city of Pakistan is Karachi (with population around 24 million), which is also one of the largest in the world.

Karachi, apart from being a lively city with fabulous night life, is the financial hub and main seaport of the entire country. The economy of Pakistan belongs relatively to the top worldwide with significant growth each year.

On the other side of the fast development stands several challenges and issues including overpopulation, (declining) poverty, illiteracy or even corruption and terrorism – slowing the progress down. Pakistan also belongs to the countries known for their nuclear power. Last but not least, it is a member of NATO, G 20 or Kyoto Protocol.

The area where Pakistan is situated used to be home to several different cultures (Neolithic culture, Indus Valley Civilisation etc.) and ruled by various empires and kingdoms (Alexander of Macedonia, Delhi Sultanate, Mongol Empire or the British Empire) and is also known to be the cradle of civilisation.

The modern history, Pakistan was established as a Muslim country in the name of Islam in 1947.

The recent times have been stained by several military conflicts and relative politically unstable situation, resulting in the slower development.

Despite the tougher time Pakistan has gone through recently, it is a place with true nature riches and wonderful sceneries. The geography of the country is quite diverse, depending on the location.

The Karakoram Mountains on one hand make a perfect hiking gateway, The Baltit Fort in Karimabad will surprise every adventurous explorer, or the Saiful Muluk mountain lake with azure water will make your eyes go wild.

Something that cannot be missed is also the Pakistani cuisine – a delicious masterpiece full of unique flavours which will please everyone’s taste buds.

END_OF_DOCUMENT_TOKEN_TO_BE_REPLACED 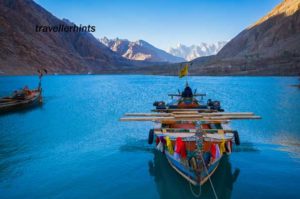 The complicated past does not have a single influence on the superior cuisine, endless…