A piece of Paradise within Himalayas. Bhutan is definitely a magical place where beautiful and pristine landscape meets breathtaking ancient monasteries and inspiring Buddhist culture.

A small landlocked country hidden in the Eastern Himalayas – that is Bhutan. Officially, the Kingdom of Bhutan, is a sovereign state bordering with China, India, Bangladesh (separated by Assam and West Bengal) and partially Nepal (they are separated by Sikkim, the Indian state).

The country is home to population of more than 742 000 people and around two thirds of them are Vajrayana Buddhists, which is also the official religion in the country.

The rest of population follows Hinduism. The official language is Bhutanese, which is a Tibetan language. The Kingdom of Bhutan is a small state covering an area of circa 38.4 thousand square kilometres.

Bhutan’s capital city is called Thimphu, which is also the county’s largest city. History of Bhutan is tangled with Tibet and that mostly due to the fact that it used to lie on the well-known Silk Road (which was a trade routes network back in ancient times).

During the past, Bhutan had also tight relations with the British Empire and India with which it signed a friendship treaty in 1949. The constitutional monarchy in Bhutan was established in 2008.

Today, Bhutan is a member of UN and it is considered a high income economy in the region.

Bhutan’s colourful history and strong religious importance are the most important sources for its uniqueness. The “Himalayan kingdom” is interlaced by breathtaking Buddhist temples, monasteries and sacred places, usually located in spectacular location such as top of the mountain – creating a magic atmosphere.

The Buddhist art is a masterpiece itself which breathes though every wall. Bhutan’s nature is also a nature wonder on its own. It is given by law that at least 60 % of the county’s area must remain forested. Therefore, the country is a perfect location for inspiring hikes and stroll across jaw-dropping mountain peaks of pristine Himalayan Mountains.

Considered a high value destination, Bhutan actually makes all foreign visitors pay a daily fee of minimum 250 $ as a tariff, which actually covers accommodation, transport, food and even a local guide – making it a great deal for a great price.

END_OF_DOCUMENT_TOKEN_TO_BE_REPLACED 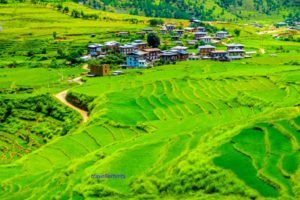 A piece of Paradise within Himalayas. Bhutan is definitely a magical place where beautiful…