Inspiring dominance of mountains in Nepal and the mysterious ambience of its monastery-spotted landscape will leave you speechless. The story of sacred Himalayan adventure begins with a single step.

Nepal is a South Asian country. Thanks to its landlocked location, it is bordered by India on the south and China on the north and also Bhutan and Bangladesh (both separated by small Indian territories). The total area of Nepal covers around 147 thousand square kilometres.  The country is home to a population reaching 26.5 million people.

The multi-ethnicity of the Nepali nation is visible on the broad variety of ethnic background of its people whose official language is Nepali. There is also a number of other recognised languages spoken within the population (such as Newar, Tharu, Gurung and others). Nepal is a country of many religions, although the majority one is Hindu, followed by Buddhist.

The capital city of the kingdom and also the largest city is Kathmandu, which is also the country’s largest urban agglomeration, economic hub and an important entry point and starting destination for most of the tourists.

Nepal is a developing country struggling with severe poverty and widespread hunger and still suffering from the transition to a republic (with representative democracy) from a monarchy. It belongs to the United Nations members.

The kingdom is indisputably a country with one of the most interesting cultural heritages. With history connected to the foundation of Hinduism, it comes natural that Hindu is the dominant religion.

The last Hindu monarchy was also in Nepal. Also the Buddhist religion has actually its roots in Nepal. The modern era came with the Kingdom of the country.

Interesting fact remains, that Nepal is one of the little countries, which were actually never colonised, although there was an alliance with the British Empire.

The Federal Democratic Republic of Nepal has been declared in 2008.

The country  is charming and it main charm lies in the pure beauty and rawness of the Himalayas. Those, including the Mount Everest – the highest point on the entire planet, will make every mountain lover’s heart shiver. Incredible number of eight tallest mountains on Earth can be found in Himalayas.

Trekking, hiking, climbing and other outdoor activities and sports are perfectly made for the Nepali dramatic landscape.

Snow peaks of high mountains, pure surrounding wilderness and valleys, monasteries and sacred places, hidden challenges and finding inner peace – that and much, much more is Nepal! A place where the final journey to your self-discovery begins.

END_OF_DOCUMENT_TOKEN_TO_BE_REPLACED 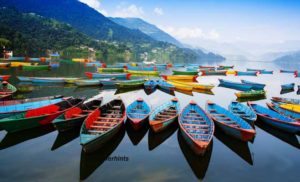