Colourful, surprising, unique and beautiful. Enchanting history and picture perfect tourist attractions are what makes Cuba a must on your travel list.

Cuba is an island country located in the Caribbean region. It comprises of the main island – Cuba and the smaller Isla de la Juventud plus several minor archipelagos as well.

The island nation  is strategically located in the area where Atlantic Ocean, Caribbean Sea and the Gulf of Mexico meet.

It is surrounded by its neighbours US (Florida and Bahamas on the north), Haiti on the east and Jamaica in the south.

Cuba is the largest of the Caribbean islands with total area covering more than 109 thousand square kilometres. The Republic of Cuba is home to more than 11 million people.

The capital city of Cuba is Havana.

Havana is also the largest and most populous city in the country, serving also as a major port and major commercial centre of Cuba.

Historically, The country was colonised by Spain during the late 15th century. That is the main reason behind the Spanish being the official language as well as the Hispanic ethnic group.

Geographically, The Island nation is considered a part of Latin America. It is a multiethnic country influenced by many cultures and origins.

Nowadays, Cuba is still one of the lasting Marxist-Leninist socialist states with a bloody history (Cuban revolution, Relationship with Soviet Union, Bay of Pigs invasion, Cuban Missile Crisis or the infamous period of Fidel Castro’s dictatorships).

Apart from tourism, this developing nation  focuses its economy on export of sugar, coffee and tobacco.

Speaking about tourism, being part of the Caribbean means that you won’t have to look hard for beautiful places, sugar white beaches, turquoise water, palm trees.. and holiday ambience all around.

Cuba is also well known around the world for its finest cigars’ production. The tobacco production has a great role in Cuba’s export.

The cigars can be bought worldwide and their quality is excellent. Actually, native Cubans are the ones who taught Europeans how to smoke.

END_OF_DOCUMENT_TOKEN_TO_BE_REPLACED 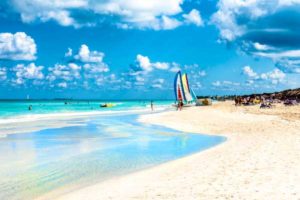