Mexico composes the southern part of North America, south of the United States and north of Guatemala and Belize. It has coastlines along the Pacific Ocean, the Caribbean Sea, and the Gulf of Mexico. A fascinating country, with renowned cuisine, pleasant year-round warm weather, and ancient archaeology, Mexico is a popular international destination for its beach resorts, climate and culture.

The climate varies from a northern Mediterranean, to a subtropical, semi-arid central region and tropical desert to the south. There are high mountains in the north, and there are also plains, desert, tropical rainforests, and lush, temperate forests. Many visitors seek a relaxing trip in the tropical and subtropical beach resorts.

The Pacific Coast region, including Oaxaca and Guerrero, is a popular region for resorts. Mexico City, the largest city in North America, is located in Central Mexico. It is located over 7,200 feet, and air quality has been difficult to maintain given the population growth and geographical setting near mountains. Now the capital, Mexico City was once an Aztec capital, named Tenochtitlan, until being conquered by the Spanish.

Native Americans settled in Mexico thousands of years ago, and the Aztecs were a major Empire of Latin America. There were highland and lowland type civilizations, which developed complex social systems and empires. There were several smaller tribes with unique customs, and many people depended on agriculture.

In the 16th century the Spanish took over rule of the Aztecs land and established a colony. In the early 19th century Mexican revolutionaries captured Mexico City and separated themselves from Spain. The United States occupied Mexico during war, and later they were occupied by France.

The 20th century saw five years of revolution, resulting in drastic changes to the fabric of society. The Mexican Constitution was created in 1917, and reform continued as the country shaped its national politics, industries. The population has increased quickly and the economy modernized. International relations with the United States and Canada have complicated trade and border issues.

Today, the political system continues to have issues, though the economy and social progress are gradually improving. Violence in the cities, along with sex and drug trafficking, is a persistent issue.

In addition to Mexico City, urban settings like Acapulco, Cancun, Mazatlan, and Los Cabos are world-class cities. Also, Guadalajara is the home of traditional mariachi music, known for their tequila and scenic city centre. For a remote wildlife adventures, see one of the Monarch Butterfly Breeding Sites, Sumidero Canyon, or Copper Canyon. Some of the popular ancient Mayan and Aztec sites to visit include Teotihuacán, Templo Mayor (in Mexico City), Monte Albán, Chichén Itzá, and Palenque. These Mayan and Aztec temples and ciy-states give insight into the societies, religions, and daily life of ancient Mexico.

Mexico has a collection of regional cuisine, influenced by different ethnicities, that varies by climate and geography.

In the Northern region, dishes are centered on meat, and influenced by the U.S.A and Europe. The Central region has flavorful stews, like Pozole, and meat dishes, with traditional spices. Southeastern Mexico has more Caribbean-influenced cuisine, with chicken and vegetable dishes.

Given access to the ocean, the coast has more fish and seafood dishes. Many regions have corn-based dishes and tend to be spicy. Mexican mealtimes are Spanish-influenced, as they typically eat their main meal in the mid-afternoon, and typically have a smaller breakfast. It is recommended to try local foods, typical to the town you’re visiting.

Mexican culture is very centered on family, language and food. People have a lot of pride around local traditions. A vast majority of Mexicans are Roman Catholics and the Lady of Guadalupe is a huge symbol of faith, with her feast day recognized on December 12th. Spanish is the official language, although some native languages are spoken, popularly Nahuatl and Yucatec Maya.

These make up over 2 million speakers. Football is the most popular sport, followed by boxing. Traditional sports, influenced by Spanish colonization, are bullfighting and charreada, a style of rodeo.

As one of the most popular travel destinations in the world, the country has intriguing history and culture which sets it apart in the Americas. Mexico has great archaeological and cultural symbols from its rich ancient civilizations, attractive beaches and mountainous forests, and a fascinating capital city.

END_OF_DOCUMENT_TOKEN_TO_BE_REPLACED 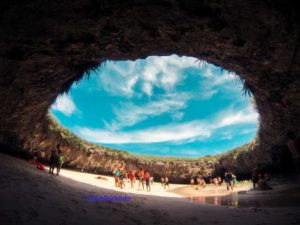 Rich tradition, cuisine and culture among a growing modern country and thriving beach…