The city known for its culture and for being home to one of the most famous composers in the world – Wolfgang Amadeus Mozart is one of Austria's most significant cities. Salzburg, located just nearby German borders will surprise you with number of attractions to see and wonderful places to eat.

Salzburg is Austria‘s fourth largest city, situated only short distance from the borders with Germany (it is only about 150 kilometres far from the large city of Munich in the south of Germany).

Salzburg is mostly known for its Old Town, which has incredibly preserved architecture (in comparison to other cities in Austria) in Baroque style and also for the gorgeously looking mountains surrounding the city and thus creating a stunning landscape.

The scenic views are simply unforgettable. The Salzburg’s Old Town is on the UNESCO World Heritage Sites list. 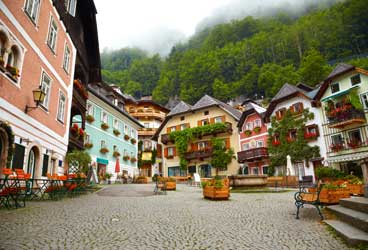 The city itself is relatively small and is home to only around 150 thousand people.

Salzburg is also imprinted in the history (and cultural history especially) by being a birthplace and home to Wolfgang Amadeus Mozart, one of the most famous composers of the 18th century and over the time.

Another music highlight was the famous musical play The Sound of Music which was performed in the city during the 20th century.

Apart from that, Salzburg is a place with diverse and wide art scene, endless number of world class restaurants offering delicious food and drinks, classical music which still echoes in concert halls ever since Mozart times and breathtaking sceneries.. all creating the perfect and unique vibe only Salzburg can provide. 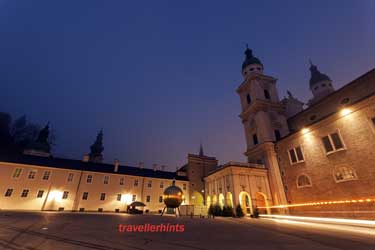 There is more than four thousands culture related events happening (including concerts, performances, festivals and others) each year and it’s no wonder that the city does not stand behind the capital of Vienna and also belongs to one of the most cultural cities worldwide.

The castle and fortress of Hohensalzburg in Salzburg is one of the most beautiful fortifications of its kind across the whole Europe.

The Castle was built on the top of the Festungsberg hill and thus is overlooking the city from the altitude of more than 500 metres.

The medieval castle with baroque tower peaking in the distance was constructed as a wish of the Archbishop Gebhard von Helfenstein and was further expanded under the Roman Empire rule.

After the refurbishment in the 19th century, the Castle has been one of the largest tourist attractions of the city and host several events every year and is also a home to a Fortress Museum. 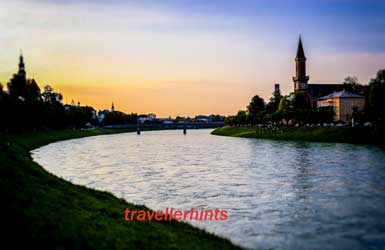 The biggest appeal of the Hellbrunn Palace is probably its trick fountains located in the surrounding broad park.

The park is a form of an extensive lush gateway around the Palace and provides a unique experience of the Palace’s courtyard.

The fun providing trick fountains spray water in an unchanged form like 400 years ago and the mechanical figures create a magical performance.

The Hellbrunn Palace itself was constructed between 1613 and 1621 by the Prince-Archbishop of Salzburg named Markus Sittikus von Hohenems and should initially serve as his summer residence.

The Mirabell Palace and its famous gorgeous gardens are an Austrian cultural heritage listed on the UNESCO Heritage list, together with the Salzburg Historic Centre.

The Palace was build in around 1606 and its biggest attraction is the Mirabell Hall which used to serve as a banquet hall – today being a place for some of the most beautiful wedding ceremonies.

The name Mirabell comes from Italian and means „admirable“ or „beautiful“. The surrounding gardens are in early-baroque style and comprise of plenty of flower ornaments in decorative geometrical form. 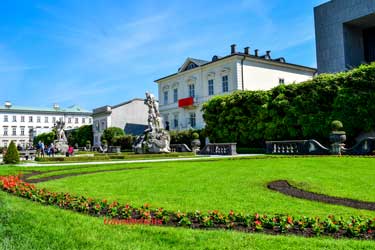 Petersfriedhof stands for a cemetery and fascinating catacombs carved in the rock face.

The St. Peter’s Cemetery is one of the oldest graveyards in Salzburg (actually the oldest Christian one) constructed in 1627.

The graveyard is also the final resting place of mostly rich and aristocratic families from the city and the fancy chapels served as a pretentious sign of wealth of their owners. The catacombs nearby carved into a rock are dating back to the Early Christian era.

Situated in the oldest part of the city, the St. Peter’s Abbey in Salzburg is a church founded by St. Rupert and built originally in 696 AD.

Even though that the present building has little to do with the initial one, as it was constructed centuries after and also renovated into the Baroque style in both 17th and 18th century.

Thanks to the multiple renovation and various times of origin, the building contains different elements including the Romanesque, Baroque and even Rococo.The Church itself preserve many artistic masterpieces and treasures, such as altar paintings, or the Salzburg Madonna. 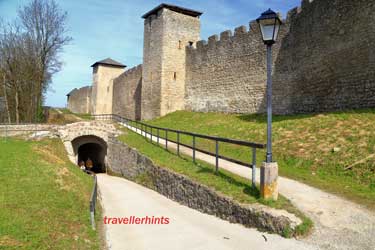 The Mönchsberg is a mountain towering above the city, reaching 507 metres above the sea level.

The name Mönchsberg („Mönchs“ and „berg“) comes after after the monks who lived by the mountain.

Thanks to the respectable high, the top of the hill offers spectacular view over the city and its surrounding during a clear day.

There is a fast lift helping people to get to the top and that only within 30 seconds. There you can find the Museum of Modern Art Mönchsberg.

The Residenzplatz, as the name reveals (platz = square) is a large square situated right in the heart of the Salzburg’s historic city centre.

Not only thanks to its location, it belongs to one of the most popular tourist attractions of Salzburg.

The Square itself dates back to 1587 in Baroque style by Wolf Dietrich Raitenau, the Archbishop of Salzburg at that time.

The square is decorated by a stunning Baroque fountain named Residenzbrunnen) and framed by the Salzburg Cathedral and the New and the Old Residence.

One of the interesting facts is that the Square turns into a summer Open Air Cinema each year.

The Residenzgalerie is a popular art gallery located in the second floor of the Alte Residenz (Salzburg Residenz Palace).

The gallery offers many collections including famous artists such as Rembrandt, Carlo Saraceni or Carel Fabritius.

The gallery today runs on loans from many private owners and also the Austrian museums. Some rooms of the Residenzgalerie are even made of gold, creating a unique ambience.

Just by the Domplatz, the Salzburg Cathedral is a real pride of the city. The Cathedral dates back to 774, or actually the initial church building at the site – the new one was constructed during 1181 – 1200.

The Romanesque style Cathedral burnt in 1998 which led to the new designed building by Santiago Solari, an Italian architect.

Some of the attractions of the Renaissance building are the plaza inside with a Virgin Column at its centre, simple yet stunning interior or the once restored dome (initially destroyed during the World War II).

A Baroque Palace located only four kilometres outside Salzburg – that is Schloss Klessheim, a jewel surrounded by stunning gardens in a beautiful nature surrounding. At the site of original smaller property, the construction of the castle „Favorita“ begun in 1700.

However, after the owner Prince Archbishop Johann Ernst Graf Thun dies, the new Archbishop decided to change the purpose of the Palace and thus create a elegant Castle. Nowadays, the Castle is home to the Salzburg Casino.

END_OF_DOCUMENT_TOKEN_TO_BE_REPLACED

Places to Visit in Austria 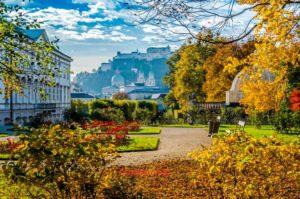