Vietnam is a country located in Southeast Asia, situated on the eastern part of the Indochina Peninsula. It has a coastline stretching across 3 444 kilometres and borders with China, Cambodia and Malaysia.

Vietnam is one of the top ten most populous countries in Asia with the population reaching more than 91 million people.

The total area of the Socialist Republic of Vietnam (the official name) covers over 332 square kilometres. The official language is Vietnamese.

The country capital city is Hanoi, located in the northern part of the country. It is the second largest city (after Ho Chi Minh City) and serves as an important political and economic centre.

Vietnam is a fast growing economy with improving living standards and declining numbers of people living in poverty. It is also a member of the World Trade Organisation, which speaks for further development and better living conditions.

The country is a territory with history dating back to the centuries before Christ. Many dynasties has changed over the past, followed by the French Indochina period (under French rule) and iconic Vietnam War (1954 – 75), which was a war between South and North Vietnam and technically a cruel and long fight against the oppressive communist regime and its reforms where United States were included.

It resulted into a merge of both South and North Vietnam, which laid the first brick towards the Socialist Republic of Vietnam. However, the war itself had devastating results with massive numbers of casualties.

Fast development and progress nowadays are resulting into booming popularity of Vietnam among tourists (especially since 1990’s) who do not fail to discover biggest treasures and natural beauties of this unique country with breathtaking cultural heritage.

The chapter on its own is Vietnamese cuisine, which is a delicious tradition incorporating five different tastes (sour, spicy, bitter, salty and sweet), based on fresh fruit and vegetable, rice, soy sauce and seafood and spices such as lemon grass, coriander or mint. The final culinary experience is unforgettable.

END_OF_DOCUMENT_TOKEN_TO_BE_REPLACED 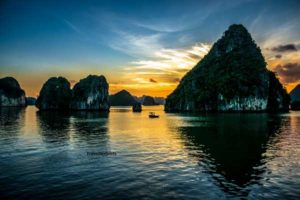