A Trip to the Moon on a budget - Craters of the Moon National Monument! Idaho, United States.

Smack dab in the southeast corner of Idaho, USA is a landmark as stellar as it is grounded: Craters of the Moon National Monument. The United States has many unique rural landmarks to visit, but if you want one that is truly out of this world, then this one is worth the trip. Idaho’s capital, Boise, is a great place to start for this adventure. 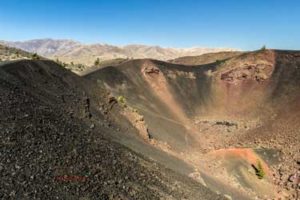 Following scenic route 98 from Boise east, you will drive over rolling sagebrush covered hills, through brook veined valleys, and emerge out of the wilderness into a little town of Carey, ID.

Turning left through town and continuing on route 98 you will then drive ten more minutes east before you come upon the land island that is Craters of the Moon National Monument.

What you will see is a mass of crusted lava rock extending south and east for miles. It is a true moonscape, especially in winter months when the green leaves of scrub brush are covered in snow.

The visitor’s center is just a few feet from the highway, tucked into the lava rock itself. Who wouldn’t want to stop in and check out a Moon National Monument, right here on Earth!? 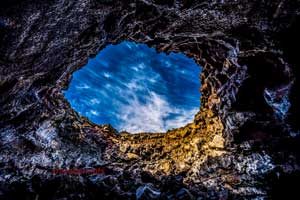 Craters of the Moon National Monument was created during a period stretching from its first eruptions 15,000 years ago to its last 2,000 years ago.

During this time, lava flowed from a number of small rifts in the earth that are collectively called the Great Rift. These eruptions began very close to the visitor’s center and stretched more than 50 miles beyond!

Now this lava is long cooled, but there could be a new eruption at any time! According to modern estimates by the U.S. National Parks Service the average length of time between eruptions is 2,000 years, and it has been more than 2,000 years since the last eruption.

Do you want to be around during the next Moon National Monument eruption!? I think not! But all the more reason to get a glimpse of the monument before it erupts again.

Right next to Craters of the Moon National Monument, on its northern edge runs the historic Oregon Trail, traveled first by Lewis and Clark in the 1800s, and then carved into the dirt by thousands of pioneer driven wagons making their way west to colonize America. 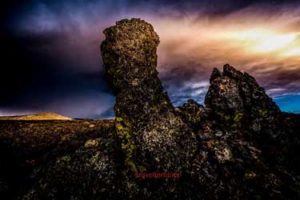 The ancient lava field then extends out to the east and south to cover a total of 618 square miles. It is advised, though to keep to the man-made trails running through the park, as it is easy to get lost if you leave them.

Nobody wants to get lost on the moon, and luckily, it is easy to follow the trails and stay safe on this lunar monument.

One of the things that makes this Moon National Monument such a fun national park to visit is that it is an attraction for travelers in every season! In the summer, hiking and educational events at the learning center make this monument fun for the whole family.

Everyone from avid walking adventurers to curious readers who would prefer to stick to the informational pamphlets and talks at the learning center will enjoy this impressive monument.

In the winter cross country skiing and snowshoeing on the groomed Winter Trail and Snowshoeing Trail take you through almost all of the park, amidst an interstellar winter wonderland.

Who wouldn’t want the chance to ski on the moon? Well, now you could have yours! For the cost of a full tank of gas from Idaho’s capital, you could visit the Moon on a budget, right here on earth.

Craters of the Moon formed during eight major volcanic eruptive periods between 15,000 and 2000 years ago!

How to Get there:

The closest commercial airport is Idaho Falls Regional Airport or Road trip would be the best an option! ( The national park not close to anything, so be well prepared for a road trip)