Do not miss out big Daddy, the oldest resident crocodile who is over 100 years old!

Visit the largest crocodile home in Africa at Mamba Village Centre in Kenya!

Africa’s largest crocodile enclosure, the village center got its name “MAMBA” from the Swahili dictionary which translates to crocodile.

The mamba village center has a staggering number of 12,000 crocs of all ages and sizes ranging from giant crocodiles to baby crocodiles which have just been hatched and also white crocodiles.

The center is located 10 kilometers from Mombasa Island along the Nyali area at links Road opposite the Nyali Golf club and en-route to all nearby major hotels along the Kenyan North Coast and sitting next to wild waters a family friendly entertainment park.

It started in 1984, Mamba Village was initially a quarry and a dumping site before Shalom, from Israel, came up with the idea of conserving the reptiles with the aim of selling them for their skins. 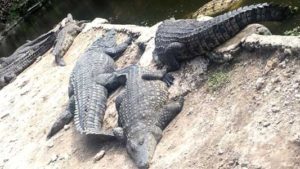 However, finding a market and exporting the skins was difficult and the farm does not export anymore, as one saying goes by “the closing of one door is the opening of another one” and hence the idea of crocodile farming for tourism bore its seeds from there.

A typical and comprehensive day tour of the center begins with travelers being shown a movie on the life cycle and behaviour of crocodiles, followed by a comprehensive tour of the rest of farm, and ends with the highlight of the day: a spectacular scene of blood-thirsty crocodiles fighting for food during feeding time.

A tour of the farm takes about two and half hours to three hours to complete the entire farm.

Hundreds of travelers a day flock to Mamba Village Centre to watch the spectacular but mind-bogging feeding of these aggressive reptiles, and to get a glimpse of one of the oldest and the biggest man eaters at the farm, “Big Daddy”, sun basking along the tropical garden trail.

Big Daddy is a male crocodile brought to the farm 25 years ago from Tana River where he had feasted on five people.

Now 120 years old, 6 meters tall and weighing 1000kgs, Big Daddy is now blind, but still remains the main attraction at the farm, with travelers coming to watch him being fed every Friday at 5pm at his pond, where he stays with his two wives, living beneath a sign:

“Please send me more tourists the last one was delicious”.

The farm has a feeding time schedule every day at 5 pm and it is an incredible experience for the traveler to witness as these mighty reptiles jump up few meter from their pool in order to get a piece of the meat.

A guide mounts a platform and hangs a large chunk of meat by a hook, which he then brings down close to the pond, teasing the man eaters to catch it.

It is an amazing sight to watch as the crocodiles stretch their necks and fight to have a share of the meat. The pond where the feeding show is held has 56 crocodiles.

The aggressiveness of these reptiles is evident some of them have broken jaws and others are tailless as a result of fighting to grab pieces of tasty morsels. 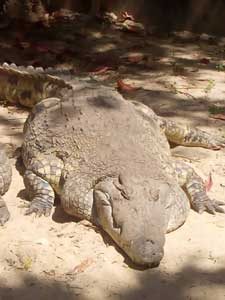 There are numerous ponds at the farm where the 12 000 crocodile are kept according to their ages, including the very young ones aged 4 to 5 years that are ready for slaughter.

The farm breeds the crocodiles using an incubator where they put the eggs collected to hatch.

They can even determine the sex of the crocodiles by controlling the temperature.

The male crocodiles are usually bigger than the females.

An artificial waterfall on the farm flows opposite two abandoned ponds, which used to be fishing ponds for mud fish that are used for feeding the crocodiles.

Mamba Village Centre also has a Snake Park with both poisonous and non-poisonous snakes, a spider house with spiders such as the baboon spiders, so called because of their dark hairy bodies, as well as some four donkeys where kids can enjoy arena rides. 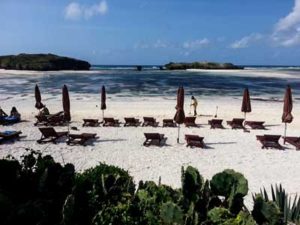 Meat-eating travelers to the center will get an exotic experience of wild game expertly grilled to perfection at the Mamba Restaurant which specializes mainly on wild game where the delicacies on the menu are crocodile meat, ostrich meat and zebra meat, the restaurant also offers sea foods on the menu.

Souvenirs can also be bought at the Mamba Souvenir shop located within the village.

Stunning collection of plants and flowers are present in the mamba center at the botanical gardens such as orchids and aquatic flora.

They also have on display carnivorous species and marine aquarium.

The Crocodile Farm boasts a nice campsite with clean washrooms and a covered dining room with facilities that are perfect for a group of up to 80 children and 50 adults.

Security in the Mamba Village campsite is as a matter of high priority where the park has a perimeter fence and around the clock guards.

East Africa’s largest crocodile farm also offers horseback riding and camel riding where the latter is an unforgettable and a unique experience not worth missing.

Beyond Mamba Village’s crocodile population, there is an ostrich enclosure and a giraffe pen, also there is a presence of a large lake in the middle of Mamba Village where travelers can rent paddle boats or take boat rides.

END_OF_DOCUMENT_TOKEN_TO_BE_REPLACED 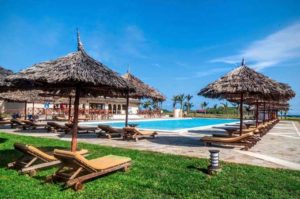 Do not miss out big Daddy, the oldest resident crocodile who is over 100 years old!