New Caledonia is an archipelago situated east of Australian continent, belonging to the Melanesian subregion in the southwest Pacific Ocean.

It consists of following islands – Chestefield Islands, Loyalty Islands and Grande Terre, as well as the Belep Archipelago and the Isle of Pines.

Nova Caledonia covers an area of about 18 and half thousand square kilometres and is home to a population reaching 268 thousand people.

The ethnicity of people is a mixture, comprising of the original inhabitants Kanak people, European descent people and people from Polynesia and Southeast Asia.

The capital city of the territory is Noumea. Noumea is also the largest city of the French special collectivity and represents home to most of the local population.

The archipelago has one of the largest economies in the region. New Caledonia is also receiving financial support from France.

The export of New Caledonia focuses on coconuts, taro, yams and plantains. Tourism still remains truly undeveloped, although there is so many places to explore.

New Caledonia was first discovered by Europeans in 1774 when James Cook first saw the shore. Although, the initial traces of humans in the archipelago date back to 1600 BCE to 500 BCE and to the period called Lapita.

The Lapita people were huge influencers in terms of agriculture and navigation over the ocean. Back to newer history, Napoleon III then took the possession over New Caledonia in 1853 and thus started the French dependency. As of 1946, the territory is an overseas territory of France.

New Caledonia is a tropical paradise, vastly undiscovered and delightful.

Visitors will be rewarded by generous hospitality, stunning nature and landscapes, picture perfect beaches and a vibrating atmosphere of both French and Melanesian culture.

The cuisine of New Caledonia is a blend of fresh fruit, rice, root vegetable and fish, often using banana leafs.

END_OF_DOCUMENT_TOKEN_TO_BE_REPLACED 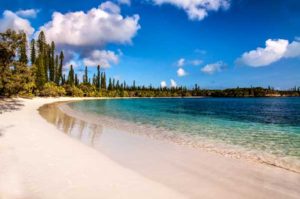