A protected area in the central highlands of Sri Lanka, Horton Plains National Park is covered with a beautiful and lush layer of mountain grassland and cloud forest.  On July 30th, 2010, the park was declared a UNESCO World Heritage Site. 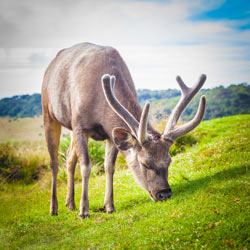 At an altitude of between 2,100-2,300 metres, the park is rich in biodiversity with many endemic species to the region, including a variety of woody plants, Sri Lankan sambar deer, and a variety of birds with the park serving as an Important Bird Area with multiple species that are only found in the Horton Plains.

The park is a very popular tourist destination and its location is extremely convenient for those touring Sri Lanka.

It is only about 8 kilometres from Ohiya, 6 kilometres from the world famous Ohiya Gap/Dondra Watch, and 32 kilometres from Nuwara Eliya, all of which are popular sights in Sri Lanka.  The park also serves as the headwaters for three major Sri Lankan rivers, the Mahaweli, Kelani, and Walawe.

Between the foliage, wildlife, rivers, and stunning high elevation scenery, Horton Plains National Park is a truly beautiful sight and a must for those visiting Sri Lanka.

Horton Plains National Park: What to Do 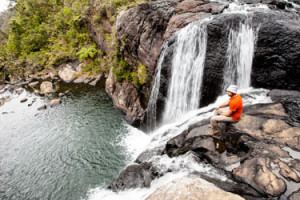 One of, if not the primary, attractions to Horton Plains is just the sheer natural beauty.

The park sits on the southern plateau of the central highlands of Sri Lanka, in between the peaks of Kirigalpoththa (2,389 metres) and Thotupola Kanda (2,357 metres), which are the second and third highest peaks on the island, respectively.

Situated near the top of these peaks, the park boasts stunning, top of the world views, perhaps none better than the beautiful World’s End.

The World’s End is possibly the primary attraction to the park.  It is a sheer cliff with a drop of about 1,200 metres.

On clear days, visitors can see all the way to the Indian Ocean, some 81 kilometres away, from World’s End.

If you are a bit squeamish, but still want a fantastic view, check out the smaller, Small World’s End, only about a kilometre away.

This cliff is only about 300 metres but still boasts wonderful views of the valleys and the island below.

There are also a few waterfalls in the park.  Baker’s Falls is a very popular attraction for visitors to the area. The waterfall lies on a tributary of the Belihul Oya and rises to a height of 20 metres.

The waterfall is a beautiful, tiered waterfall lined with rhododendron and fern bushes. The park is also home to Slab Rock Falls, which is a slightly smaller, but still beautiful fall. 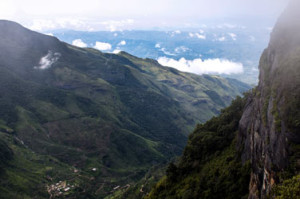 If you love hiking, there are few more stunning hiking tracks than the one offered in Horton Plains National Park.

The trek begins at the Horton Plains visitor centre and continues for 9 kilometres looping through the park before returning back where is started.

This hike is the best way to see everything the park has to offer.

It will take visitors past the World’s End and Baker’s Falls as well as through all the different types of vegetation the park has to offer.

The first part of the walk is through bare patina grassland.  The grassland leads into a dense expanse of the cloud forest.

The hike is also a great opportunity to see some of the endemic wildlife in Horton Plains.  Visitors are likely to see herds of sambar deer, as well as strip-necked mongoose, long-tailed giant squirrel, wild boar, the bear monkey, which is unique to the region, toque monkey, fishing cats, and otters.

Horton Plans is also home to the Horton Plains slender loris, which is only found in the park.  It was first discovered in 1937.

While these are very rare, there are still some in the park and maybe, if you are lucky, you might see one while hiking the trail.

If you get to the trail early, you are likely to find it pretty empty, however, later in the day, the trail can get a little bit busy as it is a very popular attraction. 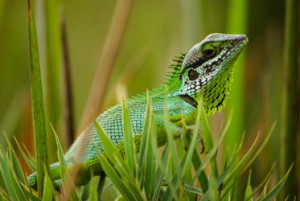 The park itself does not offer any sort of accommodation and is only open from 6am-6pm each day.  However, there are accommodation options in nearby Ohiya.

Horton Plains National Park: How to Get There

The park is serviced by road.  If you are approaching the park from Nuwara Eliya, there is an entrance point at Pattipola.

If you are approaching from Haputale, you will find an entrance point at Ohiya.  The visitor’s centre is three kilometres driving from either entrance.

END_OF_DOCUMENT_TOKEN_TO_BE_REPLACED 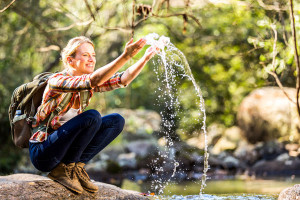