Hikkaduwa National Park is one of two Marine National Parks in Sri Lanka.  Originally named a wildlife sanctuary in 1979 and upgraded to a nature reserve in 1988, the area received National Park status in 2002 to reduce the effects to the tropical marine ecosystem, the reef and the entire marine boundary was declared a national park Sri Lanka environment protection and conservation act.

The park is home to a shallow fringing reef which sits only a few metres beneath the surface, thus making it a perfect area for snorkeling and scuba diving.

The main reef itself is a typical fringing coral reef with a shallow crest and a sheltered lagoon and only has an average depth of less than 2 metres below the surface. The reef begins at the fishing harbour and extends south for around 4 kilometres.

Thanks to the reef, the coastline is protected from the sea, allowing for gentle, and calm shoreline waters.

The area was once known for its colorful branching and table corals until a warm spell during the 1998 El Nino year lead to a massive die off of these varieties.  Additionally, there has been some damage to the reef due to irresponsible tourism.

However, despite these factors, fish populations have remained healthy and new growth of coral is taking hold.

Hikkaduwa National Park: What to Do

Quite simply, the reason people visit Hikkaduwa National Park is for the excellent snorkelling and scuba diving the reef provides.

There are around 60 species of hard coral along with over 170 species of tropical reef fish in the fringing reef at Hikkaduwa National Park.

Visitors to the reef can find large stands of cabbage-type Montipora corals and small stands of branching Acropora corals.

There is also an abundance of boulder type and encrusting corals.  In terms of fish, divers can expect to sea angel fish, butterfly fish, parrot fish, snapper, wrasses, trevally, and various species of sea turtle.

There are a variety of different dive sites that can accommodate all levels at Hikkaduwa National Park.

Beginners will enjoy snorkeling in the lagoon, which is filled with calm, gentile water as well as an abundance of reef fish.

More experienced snorkelers might enjoy taking a boat out to the sea-side of the reef, or out to the deeper coral patches near the offshore rock outcrops.

Here there are unique coral formations called “spur and groove,” formations, which appear like a giant hand protruding into the sea.  Additionally, if you are lucky, you might get to see one of the reef sharks that patrol the outer boundary of the reef.

In addition to being great for snorkelers, the park has a number of wonderful dive sites for scuba divers.  In addition to the shallower reef sites, there are also a number of deeper reefs and rock formations that are teeming with a variety of marine life.

These wrecks are fascinating sights both for their marine life as well as for the haunting sights of the boats at the bottom of the sea.  Some of the most popular dive sites in Hikkaduwa are Kiralagala, Godagala, and Black Coral Point.

Due to its abundance of dive sites and the natural tourist draw to the reef, Hikkaduwa National Park was the starting point of the recreational diving industry in Sri Lanka.

The area is home to a variety of dive shops that offer a number of different tours for all ability levels and areas of interest with regards to the reef.

Even if you don’t know how to dive yet, visitors to the park can take a scuba certification course.

Of course if you don’t want to enjoy the reef from below the water, you can always tour it on a glass-bottom boat, but it isn’t quite the same experience that you get from below the surface.

The best time to visit Hikkaduwa National Park if you are hoping to dive is between November and April.  During this time, the water is very calm and visibility is excellent.  If you visit during the southwest monsoon season from May to October, the water can be quite rough and visibility quite poor. 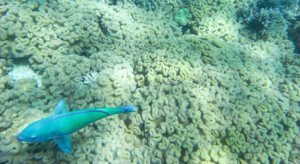 There are a number of Hotels and resorts in the Hikkaduwa area ranging from upscale resorts to basic backpackers accommodation. Also, Hikkaduwa Town popular party destination in Sri Lanka.

No matter what you budget or taste, you will be able to find something for your visit to Hikkaduwa National Park.

Hikkaduwa: How to Get There

Hikkaduwa National Park is serviced by both road and rail.  Should you be travelling from abroad, it is quite simple to fly into Colombo, take a shuttle to the train station, and then take the train right to Hikkaduwa.

It would also be simple to get there by rental car from Colombo.  The park can be reached by road from a number of different destinations on the island as well.