Imagine closing your eyes and waking up in a completely different world, the lost world. Stunning natural attractions such as waterfalls, pristine beaches, and tranquil ocean waters are only a fraction of what Vanuatu has to offer. Being easily reachable from Australia or New Zealand, yet pleasantly far from all the hustle of everyday life, this paradise is a perfect place for a holiday break!

Vanuatu is an archipelago situated in the Pacific Ocean. This island nation has an official name – The Republic of Vanuatu and is located around 1 750 kilometers from Australia.

The islands (originally called New Hebrides) are of a volcanic origin and before Spanish discovery in 1606, they were originally inhabited by Melanesians. Vanuatu gained its independence from the Europeans in 1980. The name Vanuatu is actually composed of two words “Vanua” and “tu” which can be together understood as the expression for the regained freedom and independence of the country and return to the initial values of the Melanesian people.

The archipelago is counting more than 80 islands and is shaped like the letter “Y”. Most of the islands (over 60) are actually inhabited. The capital city is Port Vila and can be found on the Efate islands.

The total land area covers circa 4 700 square kilometers. Most of the lands are rugged with a rocky coastline and not suitable for agriculture. On the other hand, the unique look of pristine nature, rain forests, sugar-white beaches with glory tranquil ocean water and jaw-dropping ocean views are some of the top attractions bringing a number of tourists each year.

Due to the volcanic and quite geologically young origin, Vanuatu still has the number of active volcanoes (both on the surface and underwater ones) with common volcanic activity. Scattered islands, unique fauna and flora, perfect snorkeling possibilities and tropical climate serve as an open invitation to all adventure lovers.

The inhabitants of the archipelago speak the national language called Bislama, although official languages are also English and French, due to the colonial history. The population reaches slightly over 221 000 people and the vast majority of them are Christians.

END_OF_DOCUMENT_TOKEN_TO_BE_REPLACED

Places to Visit in Vanuatu 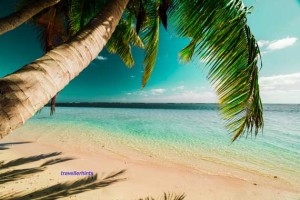 Imagine closing your eyes and waking up in a completely different world, the lost world.…