The Snaefellsnes Peninsula is one of the most beautiful areas in Iceland. It is a must see for anyone visiting Iceland who only has a short amount of time visiting the country. 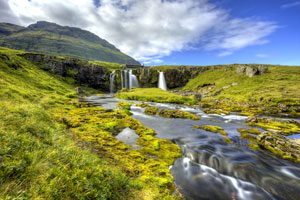 The peninsula is the home to the Snaefelljökull volcano (elevation 1,446m), the highest mountain on the peninsula and one of the symbols of Iceland. On a clear day, Snaefellsjökull can be seen from Reykjavik, which is about 120km away.

The volcano was also the setting for Jules Verne’s novel Journey to the Center of the Earth. The area surrounding Snaefellsjökull makes up one of the four national parks in Iceland. Additionally, in 2008, the people of Snaefellsnes were certified as an Earth-check community, making them the first in Europe, and one of four in the world.

As an Earth Check member, Snaefellsnes Peninsula  is a certified sustainable tourism area. 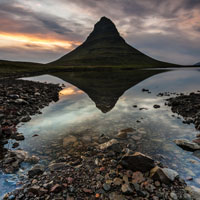 It is called “Iceland in miniature” for a reason. The Snaefellsnes Peninsula has earned this moniker by fitting so many scenic points into a relatively small space. The peninsula is the home to the Snaefelljökull volcano (elevation 1,446m), the highest mountain on the peninsula and one of the symbols of Iceland.

On a clear day, Snaefellsjökull can be seen from Reykjavik, which is about 120km away. The volcano was also the setting for Jules Verne’s novel Journey to the Center of the Earth. The area surrounding Snaefellsjökull makes up one of the four national parks in Iceland.

The Snaefellsnes Peninsula is a short drive north up the Ring Road from Reykjavik.  It is dotted with a number of small fishing towns including Borganes, Faskrudarbakki, Arnarstapi, Hellnar, Hellissandur, Olafsvik, Kirkjufell, Stykkisholmur, and Skogarstrond 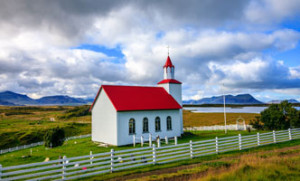 Borganes: Borganes is a town of 1,763 located on the shore of Borgafjördur.  Borganes serves as a major service area  for those travelling

to and from Reykjavik as you must travel through Borganes if you are going to go north from Reykjavik.  The majority of the industry in Borganes is centered on this fact, with Borganes having a number of the more popular store in Iceland, despite its small size.

Borganes, like most towns in Iceland, is surrounded by farms.  It is also a popular location for summer houses for people from Reykjavik, due to its close proximity to the capital. 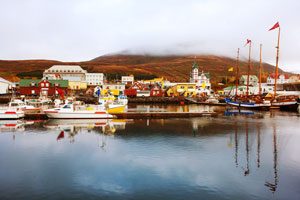 Arnarstapi: Arnarstapi is a small fishing village on the southern half of the Snaefellsnes Peninsula.  Arnarstapi’s location was very conducive to a port and as a result, Arnarstapi was a very busy harbor town hundreds of years ago.

In fact, it was such an ideal location, its was taken under Danish rule in 1565.  Denmark continued to have custodial power of Arnarstapi and the land surrounding it throughout the 17th and 18th century.

In 1990, Arnarstapi was declared a historical site by the Icelandic government. While both commercial and recreational fishing still takes place out of the harbor at Arnarstapi, the primary industry now is tourism.

There are a number of natural and culinary attractions in Arnarstapi.  One of the primary activities for visitors is to hike along an old horse trail that leads them through lava beds and along the sea towards the village of Hellnar.  The hike only takes about an hour, thus making it the perfect morning or afternoon activity. 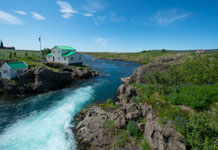 Like all Icelandic towns, Hellnar was at one point a prominent fishing village.  Now, Hellnar’s economy is primarily tourism based.

Hellnar is located nearly on the very tip of the peninsula and has a number of natural attractions.  Valasnos, a large freestanding rock, can be seen off the shore near Hellnar.  Also, Badstofa, a particularly interesting and beautiful cave, is located in Hellnar.

Badstofa is known for is particular light and for its colorful interior.  At the edge of the lava bed (the same one you walk though on the hike 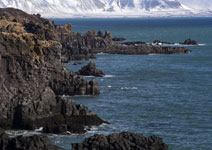 from Arnarstapi) there is a crystal clear cold water spring where legend has it, the “Holy Virgin” was once seen.  Hellnar is also home to the Hellnar church, another quaint, Nordic style church.  Lastly, the cafe, visitor center, and hotel for Snaefellsnes National Park is located in Hellnar.

Hellissandur: Yet another fishing village turned tourist attraction, Hellissandur is also located on the western tip of the peninsula.

Hellissandur is home to a maritime museum, which has an exhibit depicting the old turf houses that used to be commonplace in Iceland, as well as old marine engines, and the oldest rowboat in Iceland (ca. 1826).  Hellissandur is also right next to the Snaefellsjökull glacier, as well as the northern entrance to Snaefellsnes National Park. 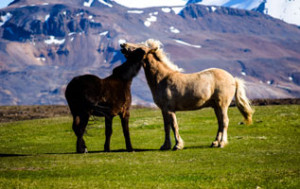 Lastly, nearby is the 412m tall Gufuskalar radio tower, which is the largest structure in Western Europe.

Olafsvik: Not far from Hellissandur is the town of Olafsvik.  With an estimated population (as of  2011) of 1,010 inhabitants, Olafsvik is the westernmost town of its size in Europe.

Given its western location, it was the first place in Iceland to receive a commercial license from the Danish Monarchy in the 17th century.

Due to its close proximity to Hellissandur, they share many of the same points of interest.  Olafsvik is home to sandy beaches and numerous hiking trails, and it provides ample opportunity for birdwatching.

Additionally, snowmobiling on Snaefellsjökull is also an option in the summer months when the road to the glacier is open. 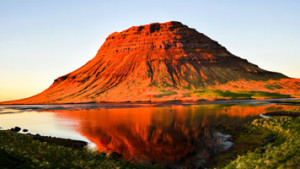 Kirkjufell is a 463m tall mountain located on the Snaefellsnes Peninsula.  It is one of the most iconic, and recognizable images of Iceland.  Its triangular shape and pointed top are very distinguishing characteristics. 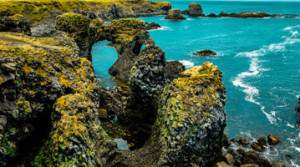 Its close proximity to small waterfalls and sprawling fields make it a scenic spot for photographers and tourists  alike. 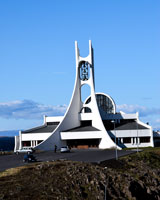 part of the Snaefellsnes Peninsula.

The fishing industry is still strong in Stykkisholmur, as is the tourism industry, with Stykkisholmur being the center of services and commerce for the region.

The town’s favorable position on the water was discovered early and in 1550, a trading post was developed at Stykkisholmur.  Nowadays, visitors and locals alike can take a ferry from Stykkisholmur to the Westfjords.

Skogarstrond provides sweeping views of the islands of Breidafjordur.  Breidafjordur extends all the way up to the Westfjords and is littered with hundreds of small islands.