This country has had a tumultuous recent history, facing dictators, civil wars and ongoing crime epidemics. Despite this, it remains a popular destination for its beautiful natural sites, rich cultural history, and archaeological preservations of Mesoamerican ruins.

This small country has Pacific and Caribbean coastlines, and is bordered by Mexico, Honduras, El Salvador and Belize. There are incredible beaches, remote and touristic, along both coastlines. The climate of Guatemala ranges from mild to tropical. Expect hot, humid tropical weather in El Petén and the Pacific Coast.

Weather in the Central and Western Highlands is typically mild, with cool evening temperatures. May to mid-October is the rainy season, during which travel to remote areas of the country may be difficult. Petén is a jungle region which boasts some of the most impressive Mayan ruins.

Human settlement in Guatemala dates back to 18,000 BC. In its pre-Columbian history, this region of Central America was home to sophisticated, organized Mayan civilization. El Mirador was the most populated city of the continent. The Spanish arrival left native populations diminished.

Guatemala was a part of the Mexican Empire until 1821, with the official independence proclamation and incorporation into the United Provinces of Central America.

It became an independent nation in 1840, and boosted its modernization and trade in the late 18th century. Following the reign of several dictatorships into the 19th century, there was a civil war in 1996 which resulted in abuse, murders, and ethnic attacks. In 1996 peace accords were met, after which there have been several democratic elections.

Guatemala City is the capital and largest city. An immense historic city, ‘Guate’, as it’s called by the locals, has shopping, museums, and historic architecture. This city is bursting with cultural sites.  Don’t miss the Sunday stroll to the Main Plaza, when hundreds of people gather for music, art and food.

Antigua Guatemala, or La Antigua, is the Colonial Spanish capital and a recognized World Heritage site. This popular city is full of cultural monuments, ruins and historic buildings. Many consider Antigua to be representative of the Spanish and Mayan cultural fusion that characterizes the region.

The city-building and development is evidenced by the countless Mesoamerican sites throughout Guatemala. El Mirador, the important Mayan hub, is still being examined and studied. Tikal is one of the largest Mayan ruins and is an amazing site to visit. Classic Mayan sites are scattered across the country.

Experience the natural destinations in Guatemala. Some breathtaking ecological and cultural spots include Lake Atitlan, Monterrico, Semuc Champey and Rio Dulce. Visit volcanoes, mountains, swim, kayak, hike, and view the stunning natural monuments of the ancient world. This country is great for travellers looking to step off the beaten track.

With a diverse cultural history, there is a mix of Spanish and indigenous cultures with a notable Mayan influence. Spanish is the official language, and over 20 indigenous languages are spoken as well as Garifuna. It is recommended to use the formal “usted” when speaking Spanish, until otherwise being prompted to use the informal “tú”.

A more traditional beverage is Atole de Etole, a sweet, warm corn drink.
It is recommended to avoid regions with high levels of drug trafficking and dangerous neighborhoods of Guatemala City, and to be careful in markets and travelling after dark.

Overall, travel is safe for those taking precautions and travelling in recommended areas.
Guatemala is a fascinating Latin American country with countless historical and ecological landmarks, plenty of recreation and incredible cultural opportunities.

END_OF_DOCUMENT_TOKEN_TO_BE_REPLACED 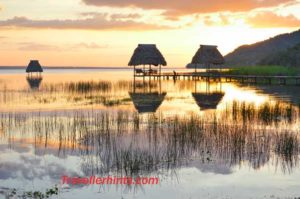