The Farewell Spit, a 26 kilometre long arm of fine golden sand that is the longest sandspit in New Zealand is situated to the north of Golden Bay, protecting it from the sea and ensuring its waters are gentile and calm. 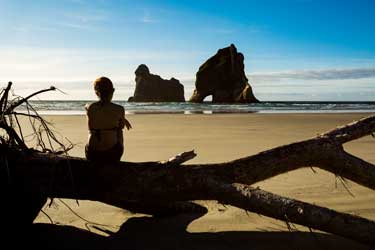 The bay itself is known for its scallops while the area is known for having wonderful weather and a generally relaxed and friendly lifestyle.

It also has wonderful beaches, and is in close proximity to a number of different natural attractions, such as Abel Tasman National Park.  As such, Golden Bay has come to be a very popular tourist destination.

The main settlements around Golden Bay are Takaka and Collingwood, both of which are located more or less on the southern coast of the bay.

Wharariki Beach is home to a wonderful and easy walking track along one of the most spectacular stretches of coastline in the region.

There is a campground on Wharariki Road, but the beach itself is devoid of any sort of development.  The beach is bordered by Puponga Farm Park and the northern end of Kahurangi National Park.

It is about an hour by car from Takaka to the carpark at the end of Wharariki Road. 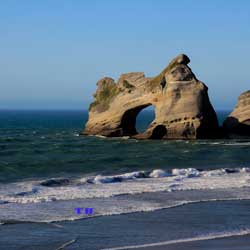 From there, it is a 20-30 minute walk to Wharariki Beach.  If you visit during low tide, visitors can walk the length of the beach, past enormous sand dunes and a number of explorable caves.

Additionally, the Archway Islands, which aren’t really islands but giant rocks, are located right offshore in the water, are among the most photographed landmarks in New Zealand.

Eventually, the beach will lead you to Cape Farewell.

Here, you might be able to see seals in the sand and rock pools.  Should you desire, you can continue the walk onto Farewell Spit, which will add another couple hours to your walk, or you can turn back and return to the carpark.

It is also known for the Canaan Downs Loop, which is a 1.5-2 hour long bike ride.

The ride is suitable for a variety of ability levels, with the main track being relatively simple and there being a number of side tracks, drops, ramps, and logrides to appeal to the more advanced riders.

With that being said, even the main track does require a decent level of fitness.

The track runs through Abel Tasman National Park and it provides riders with wonderful views, native bush, caves, and even sinkholes, don’t worry, they aren’t on the track.

The ride starts with a climb up to the start of the Rameka Track before continuing through a rougher section to Wainui Saddle.

From here, the track breaks away and follows the contour of the valley down through some creek crossings and fun, flowing track.  There is one more climb and one more descent before you are looped back to the carpark. 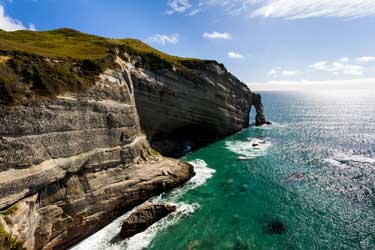 Canaan Downs is also known for the Harwoods Hole Track.

This 45 minute track takes walkers to Harwoods Hole, which, at 176 metres, is the deepest vertical shaft in New Zealand.

The walk down to the hole itself takes about 45-mintes along a track that is beautifully framed with limestone rock formations.

Along the track there is a junction where a branch on the right-hand side takes walkers to a spectacular Gorge Creek Lookout that looks out over the Takaka Valley and Gorge Creek.

Be cautious along the track as it traverses very sharp limestone rock formations.  The branch on the left-hand side is the one that will take you to Harwoods Hole.

This water-enlarged, but now dry, sinkhole drops down to an underground river that flows into Gorge Creek and the Takaka River.  Walkers should be aware that there are no barriers around the hole and approaching it is very dangerous.

Lord of the Rings enthusiasts will also enjoy a visit to Canaan Downs, as it was used for Chetwood Forest in the movies.

Around 30-minutes from Takaka, Wainui Falls, and the Wainui Falls Track, is a beautiful natural attraction for visitors to Golden Bay.

To reach the falls, visitors must drive to the end of Wainui Falls Road, where there is a carpark.  From there, it is a 1-hour, return walk to Wainui Falls along the Wainui Falls Track.

The track starts in private land but then quickly jumps into Abel Tasman National Park. 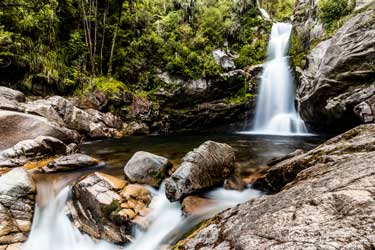 The first part of the walk requires a couple of simple creek crossings.

10-minutes before the end of the walk, you will need to cross a significant river via a suspension bridge that carries a maximum load of one person.

The track then passes through an area where landslides are common so make sure you exercise caution on this section of the track.

The track then leads you to the waterfall’s lookout where you can enjoy the powerful beauty of Wainui Falls.  The falls are about 20-30 metres tall.

The Kaihoka Lakes Scenic Reserve is distinguished by its many nikau palms, which give the reserve a tropical feel.

There are also dense glades of young matai, kahikatea, cedar, and tanekaha.  The reserve is also home to a variety of wildlife, including large, carnivorous snails, shags, paradise ducks, Canada geese, and grey ducks. There is also a nice, easy 10-minute walking track between the lakes.

The track starts at one lake and gradually makes its way down to the other.  At the end there is space to picnic at the carpark and further down the road next to the lake.

To get there, turn left at Pakawau off the main road and head over Pakawau saddle.  Then turn right on Kaihoka Road just before Whanganui Inlet.

This road then continues for 6 kilometres before reaching the Kaihoka Lakes Scenic Reserve.

Also known as Manson Cave, Rawhiti Cave is a large limestone cave in the Dry Creek Valley around 7 kilometres southeast of Takaka in the South Island of New Zealand.

The entrance to the cave is one of the largest cave entrances in New Zealand.  The opening is around 40 metres wide and 20 metres tall.

The ceiling of the cave is covered in a dense layer of stalactites that grow increasingly finer the deeper you travel into the cave.

Near the front of the cave, there are a number of stalactites that are growing in the direction of the sun due to the calcium carbonate material constantly growing over plant growth that would grow towards the sun.

There is a short walking track that will take you into the entrance of the cave and to a viewing platform.  The cave was originally formed over one million years ago before the Dry River cut the valley into its deeper present position.

The original cave roof collapsed many, many years ago, forming a massive self-supporting dome that leads down to a steep-sided pit formed of loose debris from the collapsed roof.

The track down to Rawhiti Cave starts at a carpark on private farm land.  It then winds down into the Dry River Valley for 30 minutes.

There is then a steep uphill zigzagup to the cave entrance.  A reasonable level of fitness is required for this track.

Devil’s Boots are a unique limestone formation that look like two upside-down boots sticking out of the ground.

There is a gravel road that leads out to the rocks and the rocks are located right off the road.  In fact, the road splits them, with one “boot” on each side of the road.

This is a 3-hour loop that provides visitors the opportunity to explore a number of remnants from New Zealand’s gold mining past.

It is an easy track that starts at the Aorere Goldfields carpark.  It first passes an old sluicing claim that was worked in the 1880s before continuing onto a large open plain.

After the plain, the track climbs steadily past a side path that continues on to the untouched beauty of Stanton’s Creek.

It then follows the original miners track before reaching a junction.  To the right, you will pass the end of a water race and a tunnel before a short side track to Stafford’s Cave.

Both Stafford’s Cave and Ballroom Cave can be accessed explored if you have a torch and the appropriate clothing.

Ballroom Cave is reported to have been used by miners for dances. 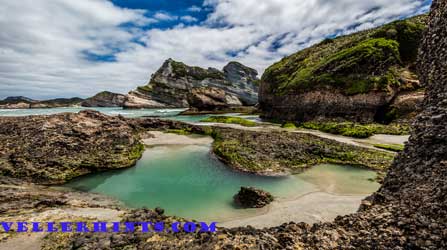 On a clear day, this section of the track provides stunning views over the Wakamarama and Burnett Ranges, Ruataniwha Inlet and Farewell Spit.

The reservoir is a great place to stop for lunch.

You will then follow the track around the water’s edge before continuing for about 20-minutes to a junction.

You will join a 4WD track before following it down to the carpark.

Golden Bay has a variety of accommodatin options, ranging from campgrounds, to hostels, to vacation rentals, to motels, to hotels to luxury resorts.  No matter you taste or your budget, there is something for you.

Golden Bay is around 296 kilometres, or 7-hours by car, from Christchurch, which is home to an international airport serviced by a number of international destinations.

It is also around 2.5-3 hours from Nelson, which has a regional airport that is regularly serviced by the larger cities in New Zealand.

END_OF_DOCUMENT_TOKEN_TO_BE_REPLACED 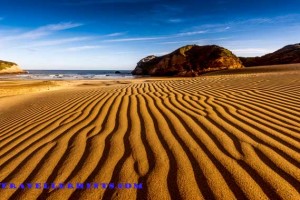