WARKWORTH: A RETREAT A WORLD AWAY, LESS THAN AN HOUR FROM AUCKLAND.

Warkworth is a town on Northland Peninsula on New Zealand’s North Island.  The town is situated in the far northern reaches of the Auckland Region, about 64 kilometres north of Auckland itself.  Warkworth is ideally situated at the head of Mahurangi Harbour.

One of Warkworth’s most prominent features is the Mahurangi River, an estuary that runs right through the centre of the township.  The river joins Mahurangi Harbour before flowing out into the Hauraki Gulf.

The other side of the river is home to the Mahurangi East Peninsula which, on which you can find a variety of wonderful seaside towns, such as Snells Beach and Algies Bay.  This is also were visitors can find Kawau Island, home to the historic Mansion House.  Just ot the east of Warkworth is the Tawharanui Peninsula, which is home to a variety of wildlife parks.  Just north of Warkworth is the thickly forested natural wonderland of the Dome Valley.  To the south is the historic township of Puhoi.

European history in the area dates back to 1853, when the town, previously referred to as Browns Mill, was founded by John Anderson Brown, who was responsible for ultimately changing the town’s name to Warkworth.  When the government began offering the land on the present day Warkworth for sale in 1853, Brown and his daughter purchased hundreds of acres.

The two subsequently further surveyed the area in smaller allotments before putting them up for sale.  The town was sustained by a stable economy, lead by logging, flour milling, and boat building.

What to Do – Warkworth

Warkworth benefits from a wide range of things to entertain visitors.  One of the primary attractions is the nearby natural wonderland of the Tawharanui Regional Park.

The park is actually one of the Auckland area’s best kept secrets.  It covers the end of a peninsula that extends out into the Pacific Ocean just north of Kawau Island.

The northern side of the park has a long sandy beach that is regarded as one of the best swimming and surfing venues in all of the Auckland Region.

Just above the beach, visitors will find a number of naturally shaded grass areas, making the perfect location for a picnic.  The park is also home to a wonderful ecology trail that runs right through the heart of the vegetation.

It starts at the far end of the beach, just beyond a protected breeding area for the very rare New Zealand dotterel.  The trail then passes around a rounded stone beach before climbing up and across farmland. 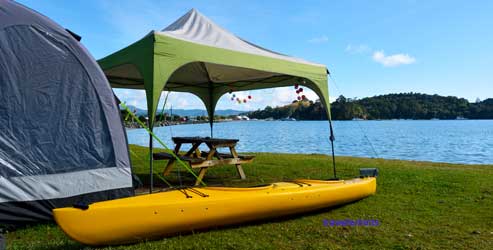 Walkers will then drop down through and across a valley of native forest.  The trail is very well marked, with points of interest and general information about the ecology of the area provided throughout.  If you are up for  a longer walk, where are a number of other, longer trails within the park that allow visitors to enjoy the many natural wonders it has to offer.  The park is about 80-minutes driving north of Auckland.  There is a by reservation only campsite within the park that is perfect for those hoping to spend a longer time out in the beautiful wilderness of this park.

Warkworth is also only a short journey away from the perfect day trip retreat at Kawau Island.

The island was originally settled by early migrations of the Maori people.  Over the years, various tribes fought for the right to live on the island before the Maori ultimately abandoned it in 1820 after a particularly bloody battle.

In the 1840s copper was found on the island, leading to it quickly becoming a copper mining haven.  Now, visitors can come visit the historic Mansion House, home to Governor Grey in his day, as well as tour the remains of the islands rich mining history.

Warkworth is also in close proximity to New Zealand’s first, and most accessible, marine reserve: the Goat Island Marine Reserve.

The reserve was originally established in 1975.  Once a severely overfished area, it is now teaming with a wide range of marine life.  The best way to take in this diverse underwater eco-system is to get in the water.  Snorkeling and diving are both very popular pastimes is the Goat Island Marine Reserve.

Under the sea, visitors can expect to find a wide array of fish, shellfish, corals, and other forms of sea life.  Above the surface, the area has a lot to offer as well.  There are two coastal walkways that lead from Goat Island Bay through coastal forest to wonderful picnic spots.

Another wonderful natural attraction is the Parry Kauri Park.  Locally known as the, “kings of the forest,” the kauri tree is found throughout New Zealand.  They are known for their huge size as well as their particularly majestic appearance.  The Parry Kauri Park is home to a network of boardwalks that will take visitors through these towering, 800-year old wonders.  It is truly a breathtaking experience and is certainly something every visitor to Warkworth should try and do.

If the culinary arts are more your cup of tea, then head to the stunning Matakana Region, which is a culinary enthusiast’s haven.  The region is close to a slew of picturesque east coast beach and is home to fantastic locally grown produce and a number of award-winning wineries.  Matakana is a very popular destination for visitors to enjoy a wonderful wine tasting tour.

The region is particularly well known for producing chardonnay, pinot gris, cabernet sauvignon, merlot, and syrah.  After you have tasted some of the region’s best wines, enjoy a wonderful lunch made with ingredients from the region at any of the wide array of fantastic cafes and restaurants in the region.

Matakana is also home to a thriving art scene.  Interspersed throughout all the farms and wineries are a number of art studios and galleries.  There are a number of very well respected and renown local artists producing in this region.  After you have tasted some of the local wines and enjoyed a fresh meal at one of the fine cafes and restaurants, visitors can finish off their day taking in the wonderful art produced in Matakana.

Where to Stay – Warkworth

Warworth, as well as its surrounding area, is home to a wide range of accommodation options.  From simple campgrounds to luxury resorts, there is something for every taste and budget.  Warkworth is also home to a number of more eccentric accommodation options, including farm stays, that are great ways for visitors to get a different experience during their visit.

Thanks to its close proximity to Auckland, visitors from abroad will find it very easy to travel to Warkworth.  It is only a short, 45-minute drive from downtown Auckland.  As Auckland is home to a major international airport, it is very easy to reach Warkworth via Auckland from abroad.

END_OF_DOCUMENT_TOKEN_TO_BE_REPLACED 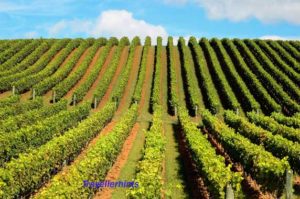 WARKWORTH: A RETREAT A WORLD AWAY, LESS THAN AN HOUR FROM AUCKLAND.