Mount Semeru - Climb Up the Summit to Witness the Heavenly Vistas

MOUNT Semeru: It is the highest mountain on the island of Java and situated East of the Island

Mount Semeru is one of the highest and active volcano in the island of Indonesia. It is a Mahameru (The Great Mountain) which composed of Hindu-Buddhist Mythical mountain of Sumeru or Meru, the house of gods. The steep-sided volcano is 3, 676 meter-tall, known for its awesome scenery – savannas, field of flowers, meadows and extreme terrains.

The place was already declared as a National Park which composed of many non-native plants, endemic local plants and foreign plants imported by Van Steenis the Dutch botanist during the colonial  era. Such as Verbena brasiliensis, Salvinia Molesta, Foeniculum vulgare mil and Chromolaena Odorata. It is also surrounded by a vegetable plantations which caused of  becoming shallower and smaller of the lake. It is one of the easiest volcanoes to climb in Indonesia.

It is a great challenge to reach the top of the summit of the Mount Semeru. At the Village of Ranupane is the starting point of the hike, there are various choices how to get there, through Pasuruan/Probolinggo, Sukapura, Ngadisari, and Cemoro Lawang, collectively all has accommodations wherein you can purchase your logistics for the hike. Just make sure you keep them light as possible yet 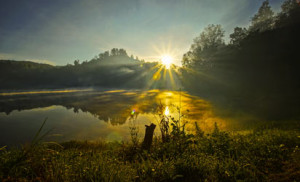 could sustain your needs to survive while on the trip because it’s inconvenient if you would carry too much stuff.

Bring adequate amount of water as other water sources were quite far. Be prepared with a thick jacket as the temperature drops down during night time turning water into ice.

Before you do the adventure you must do this thing first. First do exercise before you start climbing the mountain, second, you must understand and read the terms and condition written in the entrance.

Third, prepare the mask. So many volcanic ashes and dust during your adventure. Fourth, Never swim in and Kumbolo lake. Lastly, take more than 2-3 night stay at the mountain if you want to reach the summit. You wouldn’t be needing a guide up way to the mountain because you can easily see the trailhead just outside Ranupane.

The area has four camping sites, which all have few checkpoints;  first at Lake Ranu Kumbolo which surrounds the spot so tourists has the choice not to necessarily climb up the summit to witness the heavenly vistas of the place. Second is at Kalimati, which is located at the borderline of a bunch of savanna and a hilly climb through mountain forest heading to the actual cone of the volcano.

Third and last camping sites are at Arcopodo and Killik who has several flat areas. Meanwhile on a 15 minute walk from the first camp site, you can witness the astonishing Oro Oro Ombo Meadow, a 100-hectare savanna. Going forward to a two hour walk leads you to the Jambangan field completely covered with edelweiss flowers. 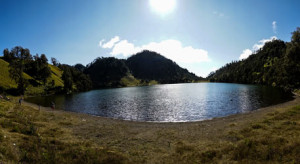 For those who chose real adventure of climbing the summit of Mount Semeru, it would took them seven-hour to reach the top from the lowest camp. And extra precaution is needed as for the poisonous gas hydrogen chloride regularly emitted by the volcano might be a serious potential health hazard to tourists.

A strenuous 60-degree climb on the sandy terrain is really exhausting. Constant fear comes up, yet finally for a moment, the rewarding feeling of watching the scenery from the top was worth all the body pains, difficulties, and fatigue witnessing the perfect view and panoramic scene above the clouds, you can also see other mountains such as Putri, Bromo, and Arjuno Wirangun.

For souvenirs, there are shops around near at mountain selling woollen scarves T-shirts and other goods. For you to stay, There are a number of basic hotels and guesthouses near Mount Semeru.

Such as the Bromo guest house which is lies 3km from the crater rim located in Ngadisari. The Cemoro Lawang, Pasuruan, Prigen and Tretes guesthouses which are near at the crater. You can avail this in a cheap price.

END_OF_DOCUMENT_TOKEN_TO_BE_REPLACED

KANDY TO ELLA TRAIN JOURNEY ONE OF THE MOST BEAUTIFUL AND ENJOYABLE ACTIVITIES AMONG MANY OTHER IN SRI LANKA. So then, we were a few nights in Kandy. Finally, all of us want to see this most stunning beauty of the hill country train journey. We headed again to Kandy train station to begin the second half of our train journey, …

END_OF_DOCUMENT_TOKEN_TO_BE_REPLACED 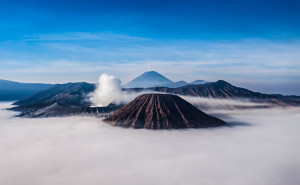 Mount Semeru – Climb Up the Summit to Witness the Heavenly Vistas

MOUNT Semeru: It is the highest mountain on the island of Java and situated East of the…