Tanah Lot is a solid rock formation on the island of Bali on which the pilgrimage temple, Tanah Lot Temple, is constructed. It was derived from the word Tanah which means "land" and and Lot which means the "sea". The name was originated as the sea itself reminds us of a small island floating on the sea.

Tanah Lot is located in Tabanana, around 20 kilometers drive from Denpasar. The Tanah Lot Temple which stands on its solid sea rock formation is a Hindu Shrine which was built to worship God of the sea to prosper and give balance of sea and earth.

The temple is considered as one of the most important landmarks in Bali with its unique surroundings and is said to have been founded by the 16th century priest Nirarha. 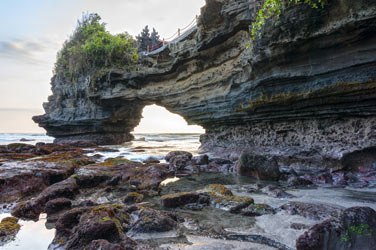 And while the purpose of it is to disseminate the teachings of Hinduism, it has remained to be the first hotspot both for worshippers and visitors who wished to enjoy the sunset and the beach itself.

The site has smaller shrines alongside the outstanding facilities such as the shops, cultural park with regular dance performances and restaurants.

From the coastal lip, you’ll be able to reach the temple byonly few minutes walking. Holy snakes can be seen and locals believe that the snakes are the guards of the temple from bad influences.

Some features of Tanah Lot include convenient pathways on your way to Batu Bolong from Tanah Lot, as well as tropical gardens and resting spots.

Shops are also available for souvenir items. Traditional snacks like jaja kelepon are must-try foodie. Popular restaurants are available from the clifftop overlooking the temple. There are also fire dance performances and Kecak.

In order to enter the temple, visitors are obliged to pay for the fee and must walk across a set of Balinese souvenir 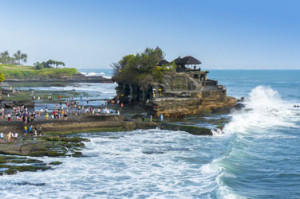 One of Bali’s most important festive parades is the heirloom pilgrimage that is worth a visit, 5 days prior to the temple’s anniversary date.

Aside from the highlights mentioned, there are also 8 holy temples surrounding Tanah Lot temple that will surely catch your attention like Batu Bolong Temple, Batumejan Temple and Enjung Galuh Temple.

Each of these temples are said to have its own purpose and use.

END_OF_DOCUMENT_TOKEN_TO_BE_REPLACED 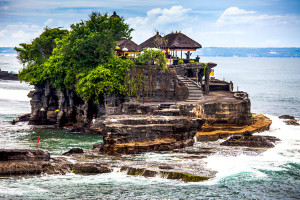 Tanah Lot is a solid rock formation on the island of Bali on which the pilgrimage temple,…