From silhouettes of baobabs, through the most glamorous landscape, unique and rare wildlife to the tranquil blue water and sugar white beaches – Madagascar is a place like no other. Precious, unspoiled and gorgeous pearl of the Indian Ocean.

The total area of the Republic of Madagascar is 587 thousand square kilometres. It has a population of more than 22 million people and also has two official languages: French and Malagasy. When talking about Madagascar, there is a great diversity and uniqueness which comes along. The nation comprises of various ethnic groups and the population keeps growing.

The capital and also the largest city of the country is called Antananarivo, which also serves as a centre for population, politics, economic as well as culture. The nation is otherwise a market economy focused on agriculture and tourism struggling with a slow grow and endeavouring the poverty and corruption reduction through strengthening the juridical system. It is a member of United Nations and Southern African Development Community.

The very first human steps on the island are dating back to 2 000 BC, being slowly settled later by people from Borneo and East Africa. The settlement continuously lasted through centuries, causing a great variety of cultural and ethnical backgrounds. During the 19th century, Madagascar was a French colony (therefore the official language), but gained its independence in 1960.

Despite many economic problems Madagascar if facing, it is simply an epic paradise with marvellous landscape and fascinating wildlife. Outdoor enthusiasts simply love it.

Madagascar offers everything from rainforests through deserts to stunning coastline with lively marine life. The coastline stretches all around, reaching incredible 5 000 kilometres, offering turquoise waters tempting every adventurous soul.

Trekking and hiking are also popular activities and the phenomenal nature around allows once in a lifetime experience. Apart from the gorgeous nature, the wildlife of Madagascar is a world’s wonder on its own. The uniqueness of animal living on the island is like nowhere else.

Islands fauna and flora is diverse and rare – for example 80% of plants can be found only there and over 60% of mammals are endemic. Incredible 5% of animals and plants in total can be found nowhere else in the world, but in Madagascar, including the Madagascar’s darling lemur – the signature animal of the island.

END_OF_DOCUMENT_TOKEN_TO_BE_REPLACED 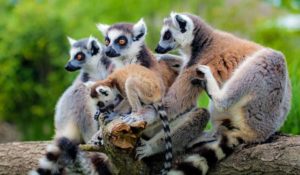 From silhouettes of baobabs, through the most glamorous landscape, unique and rare wildlife…