The Castles Ukraine provide something interesting for anyone. Here is a list of notable ones you should stop by.

Also known as Akkerman Fortress, the Bilhorod – Dinistrovskyi is located on the bank of the Dniester estuary on the ruins of Tyre, the ancient Greek city.

It was constructed during the thirteenth century and currently sits in the city of Bilhorod – Dnistrovskyi (pop. 50,296) around 18 km from the Black Sea.

The city of Bilhorod – Dnistrovskyi sits in the same category as Rome and Athens as one of the ten oldest cities in the world.

The castle is viewed by many as the primary attraction in the oldest city in Ukraine (the city recently celebrated its 2,500th anniversary).

The castle is the largest fortress in Ukraine and is despite its age and all that has occurred there it remains in excellent condition, preserved in time for the rest of the world to see and experience.  It is the best preserved medieval fortress in the country.

What do you know about Castles Ukraine??

The castle was originally founded on the ruins of the ancient city of Tyre, whose excavations are ongoing near the entrance to the fortress.

It was originally constructed with the purpose of defending the town from the constant waves of invasions from nearby enemies.

The fortress served this purpose well, aided by its over 2 km worth of walls, until the fifteenth century when it was finally overtaken by the Ottomans after a lengthy battle.

They renamed it Akkerman (the White Fortress) and maintained control of the fortress for over three hundred years until the Russian Empire claimed it in the 19th century after victory in the Russo – Turkish War.

Eventually, the fortress became less and less important as a defensive outpost and now, it has been controlled by the Ukrainian state for over a century.

It is a 55 km drive that takes around one and a half hours.  From there, you will walk down Vokzalnaya Street to the park, turn right on Dzerzhinsky Street, and from there, the fortress will be visible.  You can also reach the town by train, also from Odessa, leaving every 2-3 hours or taxi. 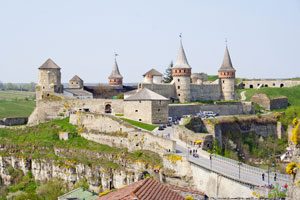 The castle is the most recognizable part of the city and has served as a major regional and national tourist attraction for a number of years.

The history of the castle is long, complicated, and truly fascinating.  Originally, it was believed the castled was built at some point during the fourteenth century.

However, archaeological excavations have now presented evidence that the castle could have been around since the twelfth or thirteenth centuries.

Whenever it was originally built, it has been subsequently, “remodelled,” a number of times since then.  At the turn of the fifteenth century, the voivode of Krakow, Spytek of Melsztyn began the project of updating the castle, which had grown outdated but was still vital to the local defence.  During this upgrade, the old towers were renovated and ten new towers were installed.

Only around a hundred and fifty years later, the castle was renovated yet again.  This time by Hiob Brutus, who was a military engineer and architect.

It was Brutus who was responsible for adding an additional western tower and an additional eastern tower.  He also added the eastern wall as well as the underground gallery.

These many renovations were necessary because the castle often found itself the victim of invaders.

The castle was perfectly situated in a strategic transport crossroad in Podolia, which made it a very desirable location for everyone in the area.

From 1434 until it was annexed by the Russian Empire in 1793, the castle played a significant role in the defence gainst the Cossack, Ottoman, and Tatar invasions, with the castle being attacked by Tatar hordes 51 times between the fifteenth and seventeenth centuries.

The castle also played an important role in the Khmelnytsky uprising between 1658-1654.  The fortress then changed hands a number of times before falling under the Ottoman rule in August of 1672.

The Ottomans remained in control of the castle for twenty-seven years, until the 1699 Karlov Peace Treaty saw the fortress return to the Polish.

Since then, the castle had seen its status as a military fortification stripped on two separate occasions.  During these times, it was used as a military prison.

It also came under Russian rule, housed Russian officers during the French invasion of Russia, became the center of the anit-fuedalism movement in Podolia, housed 67 different political organizations, and as of 1928, a historical-cultural preserve as decreed by the government.

Since that time, the castle has been a hugely popular tourist destination.  In the 1930s, the castle was getting upwards of 300,000 visitors per year.  In 1947, it was listed on the All-Union list of historical places.

In 1989, it was put on the tentative list of UNESCO World Heritage Sites and it is one of the Seven Wonders of Ukraine.

The castle is literally dripping with the history that shows itself all over the grounds.  Whether you love history, legends, medieval architecture, or just a really old castle, Kamianets-Podilskyi Castle is a must see.  It is truly a mesmerizing place that can keep you fascinated all day long.

Also one of the Seven Wonders of Ukraine, the Khotyn Fortress is a fortification located on the bank of the Dniester River in Khotyn, Chernivitsi Oblast province in western Ukraine.

It sits in the northern portion of the historical northern Bessarabia region, which was split between Ukraine and Moldova in 1940.  The Khotyn Fortress is in close proximity to the Kamianets-Podilkyi Castle.

The Khotyn Fortress’ origins go back to the 10th century when there was a fort build on the same site as the castle.  Due to the fort’s location on important transportation routes, it was later rebuilt into a fortress.

The land was ideal due to the fact it connected Scandinavia and Kiev with the Ponyzia (lowlands), Podilia, Genoese, and the Greek colonies on the Black Sea.

The fortress was rebuilt in 1250-1264 when Prince Danylo of Halych , and his son Lev, added a half metre to the walls, built a 6 metre wide moat around the grounds, and added new military buildings in the northern part of the fortress.

Throughout the fourteenth, fifteenth, and sixteenth centuries, the fortress traded hands a number of times, first being taken by the Genoese, then the Principality of Moldavia who held it for quite a while before losing it to the Ottoman Empire, who lost it to the Polish-Lithuanian Commonwealth, who had it taken from them by the Zaporozhian Cossacks. The trading of hands of Khotyn continued, all the way through World War II.

On July 6, 1941, the fortress was taken by German-Romanian armies, who maintained control of the castle until April 3, 1944, when the castle was freed from the Axis.

Now, Khotyn stands as one of the biggest cities in the Chernivtsi oblast.  It is also an industrial, cultural, and tourist center in this region.

The fortress is the centerpiece of the town.  In 2000, the Cabinet of Ministers of Ukraine created the Khotyn fortress architectural preserve, which has the intentions of preserving the fortress.  In September 2002, the city celebrated its 1,000th anniversary.

The Khotyn Fortress is yet another fascinating site filled with incredible history that can captivate any tourist.

The fortress is located at 40A St. Pokrovska St.  It is open from 9:00 am to 6:00 pm and entrance costs 4 hrn for adults and 2 hrn for children.  If you would like to take pictures, there is an additional 1 hrn fee.

Khotyn can be reached from Chernivtsi (50 km) or Kamianets-Podilskyi (22 km) by bus.  There are daily trains to Chernivtsi from Kiev.

While the structure that currently stands at the site of the Citadel of Baturin Fortress is not the original structure, it is still fascinating nonetheless. 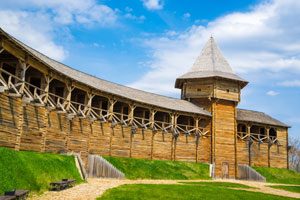 In its glory days, there were eight towers and a large, wraparound wall that protected the fortress from attackers.

The only area that was not protected by walls was the area bordering the Seym River, which was naturally protected by steep slopes and other natural barriers.  Inside all the walls, was a small open area with a church.

The fortress continued to grow, peaking during the reign of Hetman Ivan Mazepa.

In 1708, Mazepa decided to betray Russian Tsar Peter the Great and ally with Charles XII of Sweden.  Upon hearing this news, Peter the Great ordered his army to destroy the fortress.  And so, a Russian Army lead by Alexander Menshikov, took the fortress, killing everyone and looted and burned Baturin (which was made of wood) to the ground.

It was only in 2008 that a group called UkrRestoration reproduced a number of the structures on the original land.

The Citadel of Baturin Fortress is an awesome opportunity to visit a site where history is literally being rebuilt.

It might not be the same structures that people lived in hundreds of years ago, but it is still fascinating and filled with Ukrainian and Eastern European history.

The wooden church architecture, which is widespread in Ukraine, dates back to the beginning of Christianity itself in the area.  There are over 1,900 wooden churches in Ukraine and there are a number of different styles and forms specific to many regions and sub-regions of the country.

Masonry churches remained common in the urban areas, however, in the smaller towns and in rural Ukraine wooden church architecture dominated.  In Central Ukraine, the multi-chamber design of the majority of masonry churches was still common, only the construction was out of wood.

The one trait common to all the regions are the two techniques of roofing.

The first, opasannia, involves projecting logs on the top of the corners of log walls and pidashshia, where similar supports are used, but the roof is extended far enough to form a continuous overhang of the roof around the church perimeter.

There were five general styles of the wooden church that was popular in Ukraine.

1)   Castles Ukraine: Bukovina: The Bukovinan church had a tall gabled roof that terminates as a played roof over a polygonal sactuary. 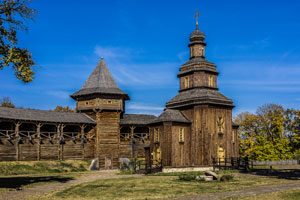 It was usually built with logs that were covered with mud and whitwashed.

2)   Castles Ukraine: Lemko: This was a three sectioned church with tall gabled roofs and a tower over each section.  The tower over the entrance section was traditionally the tallest.  Each tower was topped with a spire.

3)   Hutsul: These churches were five section cruciform churches using spruce logs to form the walls.  The central dome was formed with an octahedral shape with a splayed roof.  Unique to Hutsul churches is the use of metal work in the upper portions of the church.

4)   Boyko: Boyko churches are also in three sections, the largest of which being the nave.  Their distinguishing characteristics are the presence of intricate details, being multi-tiered, and having shingled roof work.

5) Castles Ukraine: Ternopil: These are considered a mix of Carpathian style and Kiev style.  The nave was long and rectangular and with gabled roofing on opposite ends with a small onion dome.

If you are in Ukraine, you are sure to see a wooden church.  They are a significant part of the architectural landscape and some of them exhibit incredible woodworking craftsmanship.  When you come across one, take the time to take a look.

Look up Your Best Hotels and Apartments Deals Here